Recently, my husband treated me to a surprise birthday experience. The only thing he told me in advance was that I would be doing it together with our son, Jonah. Since Jonah is, among many things, an artist (to view a small selection of his work, click here and enjoy) I was pretty sure that we would be doing something artistic.

Should I keep you guessing, or just tell you? Okay, I’ll tell you. We spent two hours learning how to blow glass. We made a somewhat lopsided yellow and orange speckled vase and a glass flower to place in it. The vase and flower were certainly not a reflection of divine perfection – nor even a shadow of it – but we had a wonderful time.

In my life, I have done a good deal of sewing and needlework, some woodworking and pottery. I have never considered my creations anything beyond utilitarian, nothing that could rightfully be called art. When I need to clear my mind, or am need of solace, an art museum works magic for me. I am dazzled by the insight and imagination of artists. The role of human imagination has been important to religious thinkers across the spectrum, from Maimonides, the neo-Aristotelian rationalist, to the mystics of the Kabbalah. Many have understood that human imagination opens a portal to heaven for divine energy to flow through. Whether an artist considers his or her work “a shadow of the divine perfection,” a reflection of the holiness of our world, or a portal to heaven, I cannot say. But often their work is that for me. I think this is true for artists of all kinds: musicians playing and composing sublime melodies and harmonies, writers and poets whose words take wing, philosophers crafting ideas to stimulate the mind to new heights, and mathematicians writing elegant proofs, to name but a few.

Art can be an expression of one’s soul. Art can reflect the majesty, beauty, and holiness of our world. Art can be prayer, connecting the artist, the viewer, or both to the divine spark within, God above, the unity of being, the source of everything.

In last week’s parashah, Ki Tissa, we read about the Golden Calf. It was an artistic creation that not only was not a prayer to God, but was in fact a substitute for God that brought a plague upon the Israelites. It was art in service of idolatry. This week we read Vayakhel, where we meet Betzalel, the artisan who builds the Wilderness Tabernacle. Betzalel’s creations are art in service of the Divine.

And Moses said to the Israelites: See, the Lord has singled out by name Betzalel, son of Uri son of Hur, of the tribe of Judah. He has endowed him with a divine spirit of skill, ability, and knowledge in every kind of craft and has inspired him to make designs for work in gold, silver, and copper, to cut stones for setting and to carve wood – to work in every kind of designer’s craft – and to give directions. He and Oholiab son of Ahisamach of the tribe of Dan have been endowed with the skill to do any work – of a carver, the designer, the embroiderer in blue, purple, crimson yarns, and in fine linen, and of the weaver – as workers in all crafts and as makers of designs. Let, then, Betzalel and Oholiab and all the skilled persons whom the Lord has endowed with skill and ability to perform expertly all he tasks connected with the service of the sanctuary carry out all that the Lord has commanded. (Exodus 35:30 – 36:1)

There is yet another sign of Betzalel’s unique spirit: the Israelites were so inspired by Betzalel, Oholiab, and the artisans building the Tabernacle that they brought freewill offerings in abundance – more and more until there was far more than was needed and Moses had to tell them to stop.

Moses thereupon had this proclamation made throughout the camp: “Let no man or woman make further effort toward gifts for the sanctuary!” So the people stopped bringing: their efforts had been more than enough for all the tasks to be done. (Exodus 36:6-7)

André Gide (1869-1951), winner of the Nobel Prize in literature once said, “Art is a collaboration between God and the artist, and the less the artist does the better.” Gide felt that true art is divinely inspired. (Isn’t it enough if it truly inspires?)

Betzalel and God were collaborators in the building of the Mishkan (Tabernacle), making Michelangelo’s words all the more prescient. Michelangelo said that art is “ a shadow of the divine perfection.” Betzalel means, literally, “in the shadow of God.” 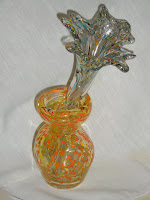 Posted by Rabbi Amy Scheinerman at 5:56 AM