I'm told we Jews are masters of guilt. At least, that’s the myth, especially with regard to the stereotype of Jewish mothers inducing guilt in their children to manipulate their behavior. I myself never experienced it, nor did my husband, but the jokes still abound. Q: How many Jewish mothers does it take to change a light bulb? A: Never mind, I’ll just stand here in the dark and suffer.

One night, more than a decade ago, I found myself in conversation with a Catholic priest at 3 am. We were standing outside Shock Trauma in Baltimore. As volunteer chaplains for the police department, we were there to attend to two police officers undergoing treated, and we were outside for a short break and fresh air. Somehow the conversation turned to guilt, and I mentioned that Jews have a reputation for doing guilt well. “You just think you do,” he laughed, “but you’re rank amateurs. We Catholics do guilt better than anyone!”

Guilt is that feeling of responsibility, remorse, and regret that creeps into our minds and takes hold of our souls when we have done something wrong, or failed to do what was right. It is the voice of conscience calling us to task. We can think of it as an ethical early warning system: it alerts us to make a change. In that regard, it is good.

It also has a flip side. While guilt can arise from real events, it can also arise from imagined wrongdoing – and that is a big problem. How can you mitigate something that never happened? What is more, guilt can hang on, clinging to our souls, long past the event that provoked it has been resolved. It can generate a host of suffocating feelings, including failure, unworthiness, shame, anxiety, and self-loathing. This is not good. 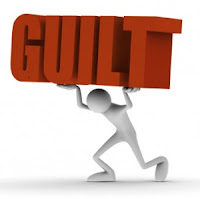 (There are also far more complicated types of guilt, including Survivor’s Guilt. In this drash, I am speaking only of the guilt we all feel from time to time, not exceptional cases.)

Parshat Acharei Mot describes a ritual that seems at one and the same time bizarre and familiar. It is familiar because we recount it each year not only when we read this parashah, but also on Yom Kippur during the Avodah service.

Aaron shall take two he-goats and let them stand before the Lord at the entrance to the Tent of Meeting; and he shall place lots upon the two goats one marked “for the Lord” and the other marked “for Azazel.” Aaron shall bring forward the goat designated by lot for the Lord, which he is to offer as a purification offering; while the goat designated by lot for Azazel shall be left standing alive before the Lord, to make expiation with it and send it off to the wilderness for Azazel. (Leviticus 16:7-10)

The first goat is offered up as a sin offering: it atones for sins committed against God. But what becomes of the second goat?

Aaron shall lay both his hands upon the head of the live goat and confess over it all the iniquities and transgressions of the Israelites, whatever their sins, putting them on the head of the goat; and it shall be sent off to the wilderness through a designated man. Thus the goat shall carry on it all their iniquities to an inaccessible region; and the goat shall be set free in the wilderness. (Leviticus 16: 21-22)

What a bizarre ritual! The scapegoat bears the sins of an entire nation on its back. Later tradition tells us the goat was pushed off a high precipice, but Torah says nothing of that. Torah is very clear: the goal shall be set free in the wilderness. In a deliberative and public ritual, the goat carries away sins the people had repented. The goat – burdened with the people’s sins – unburdens them. The goat not only carries away their sins, it also carries away their guilt. And everyone knows it.

This is a brilliant ritual. It signals the people that once teshuvah (repentance) has been done, they should expunge guilt from their souls. It no longer serves a healthy purpose.

So should we. In fact, after guilt has served its purpose and signaled the need for change, it has done its job. Chronic guilt can hold us back from moving forward to become better versions of ourselves. What is more, continuing guilt can open the door to those suffocating feelings of failure, unworthiness, shame, anxiety, and self-loathing.

The message of the goat sent to Azazel is that we must learn to forgive ourselves, just as God forgives. God doesn’t expect us to be perfect. Indeed, perfection is not a Jewish value or goal. The Jewish goal is improvement. Perfection is a goal we can never attain: no matter how hard we try, we will fail. But improvement is always within reach, again and again. I have always appreciated sports teams that award children ribbons and trophies for self-improvement. Competing against others may be a natural human proclivity, but it is not a religious value. Competing against our own selves – to improve ourselves – is a religious value of the highest order.