Blessing & cursing, Being a blessing & being a curse/ Parshat Balak

My son was married last week. I am blessed with a wonderful daughter-in-law. Since the wedding, friends from around the world have been writing to convey their warm wishes and to bestow their blessings on the newlyweds. One friend wrote, “May the lives of the happy couple overflow with health and fulfillment!” Another wrote, “May they know happiness and joy - osher v'osher.” And this one for our family: “May you and yours be present at many happy events for years to come.” To each and every blessing I say, “Amen!”

We all want our lives to be filled with blessings. Keep the curses far away from us! Remember the rabbi’s blessing for the Tsar? “May God bless and keep the tsar… far away from us!” But are we ourselves a blessing or a curse to others?

The story of Balaam and Balak told in this week’s parashah is about many things, among them blessing and curse. On the surface, the story of Balaam, prophet of Moab who is hired by King Balak to curse Israel, seems a curious tale of jealousy, paranoia, and power, topped off by the whimsical element of a talking donkey whose command of Hebrew grammar is impressive. Lying just beneath the surface is a truth far more insidious: King Balak, out of fear, seeks to curse Israel – essentially a death sentence for thousands.

Balak son of Tzippor saw all that Israel had done to the Amorites. Moab was alarmed because that people was so numerous. Moab dreaded the Israelites, and Moab said to the elders of Midian, “Now this horde will lick clean all that is about us as an ox licks up the grass of the field.” (Numbers 22:2-3)

The Israelites have defeated the Amorites in battle. Now, however, they are encamped peacefully on the border of Moab, presenting no threat to their hosts. Balak cannot see that; rather, in his eyes the Israelites are a marauding herd of animals. Balak hires the prophet Balaam to rid him of the plague of Israelites in his backyard:

Come then, put a curse upon this people for me, since they are too numerous for me; perhaps I can thus defeat them and drive them out of the land. For I know that he whom you bless is blessed indeed, and he whom you curse is cursed.” (Numbers 22:6)

Two resonances in this one verse are remarkable. First, Balak is concerned with the burgeoning population of Israel, echoing the concern of an earlier king – Pharaoh – who also felt threatened by Israel’s robustness and sought her destruction.

A new king arose over Egypt who did not know Joseph. And he said to his people, “Look, the Israelite people are too numerous for us. Let us deal shrewdly with them, so that they may not increase; otherwise in event of war they may join our enemies in fighting against us and rise from the ground.”… But the more they were oppressed, the more they increased and spread out, so that the [Egyptians] came to dread the Israelites. (Exodus 1:8-10, 12)

Concerning this first resonance: just as Israel continued to proliferate in Egypt, so too do the Israelites, threatened by yet another king who views them as a danger and seeks to curse them. Pharaoh’s curse – in the form of edicts to kill the baby boys and make the people’s servitude harsher – derives from fear and insecurity.

Second, King Balak’s words echo those of God to Avram when God sent him from his homeland, out into the wider world:

I will make of you a great nation,
And I will bless you;
I will make your name great,
And you shall be a blessing.
I will bless those who bless you
And curse him that curses you;
And all the families of the earth
Shall bless themselves by you.” (Genesis 12:2-3)

Concerning this second resonance: the influence of Avram over other nations is passive; what they send out to Israel will return in kind, be it blessing or curse. It is not Avram who blesses or curses; it is others who choose blessing or curse by the nature of their interaction with Avram and his clan. (Pharaoh’s curse came rocketing back at him in the form of the Ten Plagues.) King Balak, in seeking to curse Israel, ultimately curses the Moabites.

Balak ascribes to the Moabite prophet Balaam, however, the power to bless and curse on God’s behalf. How strange that Balaam – a pagan prophet – is acknowledged to possess the power to curse Israel thereby sentencing many in her midst to death. The prophet’s curse is cosmic conviction. Execution will be carried out on the battlefields of Moab.

Balaam’s power, we know, comes only with God’s acquiescence. And God does not permit Balaam to curse Israel, despite the hefty fee Balak is prepared to pay.

God came to Balaam and said, “What do these people want of you?” Balaam said to God, “Balak son of Tzippor, king of Moab, sent me this message: Here is a people that came out of Egypt and hides the earth from view. Come now and curse them for me; perhaps I can engage them in battle and drive them off.” But God said to Balaam, “Do not go with them. You must not curse that people, for they are blessed.” (Numbers 22:9-11)

Balak presses. He offers more money. God permits Balaam to accompany Balak and his entourage view Israel from a vantage point ideal for casting a curse upon them. When it appears that Balaam may well accede to Balak’s request, God stations an angel in Balaam’s path. Balaam cannot see the angel, but his donkey can. God opens the mouth of a donkey – a lowly animal (recall how Balak described Israel as a herd of lowly animals) – and speaks words of wisdom and insight. She can see what the prophet himself cannot see: an angelic manifestation of God.

Consider the remarkable reversals here: In the sight of Balak, Israel are animals, yet God blesses them. Balaam, hired to curse them, is prevented by his animal who speaks like a human and sees the angelic manifestation of God Balaam cannot see. Those who bring blessing see, hear, and are blessed. Those who bring curse are blinded, unable to hear, and curse themselves in the end.

We bring blessing and curse to other people’s lives on a daily basis through our words, our deeds, and our failures to speak and act. When we operate out of fear and insecurity – as did Pharaoh and Balak – we are most likely to be a curse rather than a blessing. But when we act out of our love for God and God’s Creation, we bring blessing. As shabbat approaches, consider whether you have been a blessing or a curse to those in your life during the past week. Where did you act out of fear and insecurity? Where did you act with love and concern?

This pertains not only to personal relations, but to leadership style, as well. There are people in positions of power and authority who command and demand, even disparaging and humiliating those under them. They are the Pharaohs and Balaks. They operate out of fear and insecurity masked by excessive arrogance and a show of power. And there are those who see their leadership not as a position of power, but rather one of empowerment. They seek the growth and fulfillment of those who work for them. They know that with the blessings of growth and fulfillment come greater productivity and loyalty.

This principle also pertains to parenting. Parents who dominate their children’s lives, making their decisions and shielding them from all pain, do not realize that they bring the curse of insecurity and dependence upon their children. Parents who empower their children to make good decisions, face challenges, and cope with what life dishes out, and who do not ridicule them for mistakes (who among us has not made mistakes, after all?) bless their children with confidence and honestly earned self-esteem.

Bottom line: Those who primarily exert power over others often curse them. Those who empower others bless them.

May Leora and Danny enjoy all the blessings bestowed on them. May you be blessed with all that you wish for yourself. And may you in your life be a blessing to those around you. 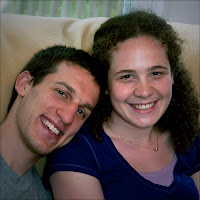