Does the end justify the means? / Toldot

In the days before the telephone, the only way to communicate long distance was by telegram. Telegrams were very expensive, so people conveyed their messages in the fewest words possible. Once a stockbroker in New York got a good tip on a company. He sent a cable to his favorite client, away doing business in London. The client in London knew the company was a dog, so he sent a cable to New York saying, “Don’t. Sell.” The stockbroker received the cable and read it aloud: “Hmmm… don’t sell. Okay, I’ll buy him 10,000 shares.”

God speaks directly to Rebekah. I can’t think of another woman in the Torah to whom God speaks directly. Rebekah is in agony because the twins in her womb are already in active competition with one another -- and in very tight quarters.

And Adonai said to her:
Two nations are in your womb,
Two separate peoples shall issue from your body;
One people shall be mightier than the other,
And the older shall serve the younger. (Genesis 25:23)

There is an ambiguity in the last phrase that I will try to render in English the best I can. There are two ways to read the phrase v’rav ya’a’vod tza’ir: “The elder shall serve the younger” or “the elder, the younger shall serve.” It is not crystal clear whom God intends to inherit the Covenant.

Rebekah, who is headstrong and decisive, confidently decides that Jacob is the right brother for the patriarchal position that will open up when Isaac dies. Accordingly she favors Jacob, supports him, and ultimately schemes with him to insure he gets what she believes God wants for him. 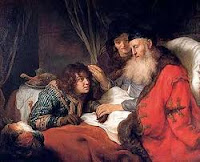 Rebekah is willing to flout social convention and act immorally to see her vision through. She purposefully deceives her nearly blind and possibly enfeebled husband, Isaac. She instructs Jacob to lie to his father in order to secure for Jacob, Esau’s rightful blessing and inheritance.

This inspires the question: Does the end justify the means?

The phrase “the end justifies the means” originated with Machiavelli. Niccolo Machiavelli promulgated this principle as a pragmatic philosophy, the purpose being to stabilize and improve governments. He did not mean to suggest that the principle applies to the interactions and relationships of people who are motivated by personal gain, greed, or even self-improvement. Immanuel Kant held nearly the opposite opinion as Machiavelli: moral absolutism. The ends never justify the means. An act is evil or good on its own merits, regardless of outcome.

What does Jewish tradition say about this perpetual conundrum?

In the case of pikuach nefesh (the obligation to save a life) the door is open to cheating, stealing, and lying if that is what is required to save a person’s life. If your life is threatened, all the doors and windows are flung open. You are obligated to kill the one who threatens you in order to save your own life: ya-avor v'al yei-ha-reg (“transgress and do not be killed”). The end justifies the means.

But the house is hermetically sealed shut if the means to the end is murder, idolatry, or sexual immorality. The principle in such cases is yei-ha-reg v’al ya’avor (“be killed and do not transgress”). Or maybe not? In the days of Deborah the Judge, Yael seduces the enemy general Sisera and kills him. In the Bavli (Babylonian Talmud) masechet Horayot 10b, we find an interesting comment amidst a discussion of the role of intentionality in performing mitzvot (commandments) and in Torah study. R. Nachman b. Yitzhak expounds: gadol avirah lishma mi'mitzvah shelo lishma -- “Greater is a transgression committed for a good intention than a commandment performed without intent.” Certainly a hyperbolic statement, but he backs up his claim by citing Judges 5:24 -- Most blessed of women be Yael, wife of Hever the Kenite, most blessed of women of tents. The expression “women of tents” is peculiar and the Rabbis explain it to mean the matriarchs Sarah, Rebekah, Rachel, and Leah. This means they are praising Yael’s actions -- seducing Sisera and then decapitating him as he slept it off -- above any of the matriarchs. That’s a resounding affirmation. Yael killed Sisera to stop a war and save many lives. Machiavelli would have approved. Kant would not.

On an even larger scale is the ethical debate concerning the atomic bombs dropped on Japan in August 1945 in order to bring World War II to a rapid conclusion. The calculation that led President Truman to give the signal to drop “Little Boy” over Hiroshima, and then “Fat Man” over Nagasaki, was that if the war in the Pacific Theater were to drag on, and Operation Downfall to invade Japan launched, between 250,000 and one million American soldiers would die. The Joint Chiefs of Staff the previous April had set the estimates at 380,000 dead and 1.6 million injured. The Japanese deaths that would result are in addition to these numbers. And added to these, it was estimated that each month that the war stretched on, 250,000 Asians (largely Chinese, and most of them non-combatants) would die. Winston Churchill said, “I am surprised that very worthy people—but people who in most cases had no intention of proceeding to the Japanese front themselves—should adopt a position that rather than throw this bomb we should have sacrificed a million American and a quarter of a million British lives…” Do these estimated casualties justify dropping “Little Boy” and “Fat Man” over Hiroshima and Nagasaki?

Rebekah’s decision is nowhere on the scale of the Atomic Bomb, but it does involve a future nation, perhaps meeting Machiavelli’s criterion. Yet terrible things continue to result from her decision: Jacob flees to Haran and Rebekah never saw him again. It appears Ishmael leaves, as well. The family is rent asunder: a very high price to pay.

Torah does not weigh in on the morality of Rebekah’s actions. None of the matriarchs or patriarchs is completely righteous and beyond reproach. They, like all of us, face some painfully difficult choices. But choose we must, because ethically, doing nothing is a choice.

How do you make such decisions in your own life? When do you believe the end justify the means? Something to ponder this shabbat.