God made me do it! / Shelach Lecha

Emo Philips is a comedian. And like all great jokes, there is a kernel of uncomfortable truth: the reality of our world is that people have committed enormous violence in the name of religion, entangling religion with their political and economic agendas, or their hate and resentment. Sadly it would not be challenging to create a Jewish or Muslim version of this joke.

There’s an exceedingly disturbing passage toward the end of parashat Shelach Lecha that seems to exhort religious violence:

Where to begin with this one?! It is absolutely horrifying to imagine that there is a God who would decree that a man be stoned to death for gathering sticks on shabbat. It is more horrifying to think there are people who believe there is a God who would command this. And it is even more horrifying that people today -- in the 21st century -- could take the words of an ancient text, however sacred, and use them to condone violent and murderous behavior. Yet it happens time and time again.

The words of Scripture -- our Tana”kh, the Christian New Testament, the Qur’an -- have been used to justify bigotry, cruelty, and unspeakable violence. Combined with claims to absolute truth, demand for blind obedience, the conviction that the ends justify any means, and the overarching claim to be doing “God’s will,” words of Scripture can be highly toxic.

John Shelby Spong, retired Episcopal bishop of Newark, New Jersey, writes in The Sins of Scripture (2005) that the Bible has been used to support the divine right of kings; justify the Crusades, the Inquisition and the Holocaust; condemn Galileo and Charles Darwin; support slavery in America and elsewhere; and argue in favor of segregation and apartheid. Today it is a weapon in the arsenal of pastors and politicians who seek to deny the civil rights of homosexuals, reverse the progress and reproductive freedom of women, justify ransacking the environment, and interfere with the science curriculum in public schools by demanding that “Intelligent Design” be taught alongside evolution.

Not surprisingly there has been a spate of anti-religion books in recent years: The God Delusion by Richard Dawkins, God is Not Great by Christopher Hutchins, and The End of Faith by Sam Harris jump immediately to mind. These books argue that religious ideas and texts are dangerous and responsible for untold suffering and incalculable deaths. (They conveniently fail to mention that Stalin’s purges, Mao’s Cultural Revolution, and Pol Pot’s killing fields brought death to millions -- and these were secular movements.) It is easy to criticize Dawkins, Hutchins and Harris. They read scriptural texts “literally” and presume everyone reads them in that manner; they provide no empirical data to support their arguments; and they make no distinction between liberal and conservative theologies, or account for interpretation of texts. With one broad brush, they condemn all religion as dangerous to the individual and to society. Dawkins, Hutchins, and Harris lack the sophistication to distinguish between religious ideas and the political institutions they spawn which too often, bent on power and control, use Scripture as a bludgeon to attack those who disagree.

Sacred text, whether we see it as coming from God, inspired by God, or sanctified by generations must -- like every text -- be interpreted. There is no avoiding that. How it is interpreted, and how it is used, is the moral responsibility of those who do the interpreting. The passage concerning the man who gathered wood on shabbat is a case in point. Do we now institute the Shabbos Police to ferret out even the least infraction of what has been interpreted to be halakhah (Jewish law is yet another level of interpretation)? Or do we reach for the highest values of our tradition and view the text through that lens?

Let me try the latter for you. The account of the wood-gatherer  -- clearly an anecdote -- precedes the paragraph about tzitzit (fringes), which is also the third paragraph of Shema, recited thrice daily. The purpose of tzitzit, Torah tells us, is to serve as a reminder of one’s religious obligations. It’s a helpful “string around the finger” in an age without calendar books and smart phones. The very premise of the tzitzit is that it is difficult to remember one’s obligations, so here’s a device to help. In this context, the story of the wood-gatherer, rather than encouraging the institution of Shabbos Police, assures the one who wears tzitzit that they will help prevent serious violations.

Examining the anecdote closely, we see that when the people bring the wood-gatherer before Moses, he does not know what to do. Moses cannot make the decision himself. He consults God, and it is only by God’s specific decree -- about this case, and this case alone -- that the wood-gatherer is stoned. There is no generalized mandate to stone other shabbat violators. To the contrary! That Moses needs to consult God, that God needs to make a decision in this case, and that no general law is promulgated all tell us that this is not an event to be replicated. We cannot consult God directly. God does not speak directly to any human being. There is no license to stone someone for what the Rabbis came to decide -- through their interpretations -- were violations of shabbat. The message we can learn is that such behavior is forbidden: We are not Moses, and God does not speak directly to us about such cases.

Religion is not the reason for bigotry, violence, and murder. It is, tragically, often the excuse for it. Any religious idea or text can be hijacked and misused to spew hatred and foment violence. That’s not the responsibility of the text or the religion. It’s the responsibility of the people who choose to interpret the texts as they do and behave as they choose. Other choices are available. 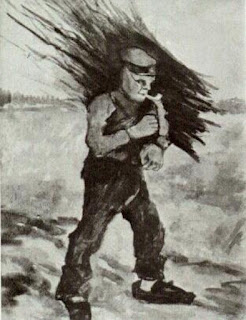 The Wood Gatherer, Vincent van Gogh (1884) sketch and study
Posted by Rabbi Amy Scheinerman at 12:30 AM