Jimmy’s spelling test lay on his desk. He looked at it. “Satelite” had a pronounced red mark through it. Jimmy approached the teacher’s desk. “Mrs. Jones,” he said, “can I have partial credit for satellite? I spelled part of the word correctly.”

Within weeks of the launch of the Hubble Space Telescope into orbit by the Space Shuttle Discovery in April 1990, it became clear that something was very wrong with Hubble’s primary mirror: it was the wrong shape. 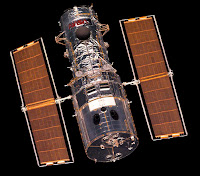 (The Hubble Space Telescope as photographed by the Space Shuttle Discovery)

The edges were too flat by 2.2 µm (micrometers); that’s a bit more than 2 millionths of a meter or, if you prefer the British system of measurement .000858 inches (less than nine ten-thousandths of an inch). Those 2.2 micrometers made a world of difference to scientists studying objects in deep space. 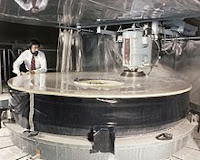 According to the report issued by the investigating commission headed by Lew Allen, director of the Jet Propulsion Laboratory, Perkin-Elmer, the manufacturer of the mirror, had ignored test results that suggested spherical aberration. The commission found that Perkin-Elmer had made numerous mistakes along the way, from failing to involve optical designers in the mirror’s construction, to ignoring quality control data. This is not to say that Hubble produced no images; it produced blurry images. Should Perkin-Elmer get “partial credit?” Few people thought they should.

When it comes to teshuvah (repentance) and our relationship with God, Torah takes a different stand: partial credit is always given. With Rosh Hashanah coming next week, we all have teshuvah-on-the-mind.

Parshat Nitzavim tells us that, looking ahead, Moses can see the ups and downs, the blessings and curses, in Israel’s future. Since hard times and suffering are presumed to result from Israel’s distancing herself from God and the Covenant, Moses twice speaks of Israel returning to God. The first time Moses says Israel will return “up to” or “until” God, and the second time “to” God:

When all these things befall you -- the blessing and the curse that I have set before you -- and you take them to heart amidst the various nations to which the Lord your God has banished you, v’shavta ad Adonai Elohekha / and you return up to the Lord your God, and you and your children heed his command with all your heart and soul, just as I enjoin you this day, then the Lord your God will restore your fortunes and take you back in love. (Deuteronomy 30:1-3)

And a few verses later:

And the Lord your God will grant you abounding prosperity in all your undertakings, in the issue of your womb, the offspring of your cattle, and the produce of your soil. For the Lord will again delight in your well-being, as he did in that of your ancestors, since you will be heeding the Lord your God and keeping his commandments and laws that are recorded in this book of the Teaching -- v’shavta el Adonai Elohekha / once you return to the Lord your God with all your heart and soul. (Deuteronomy 30:9-10)

Moses first says Israel will return “ad Adonai Elohekha” (“until” or “up to” God) which suggests approaching and making contact, but going no further. “El” (“to”) conveys a completed connection. If I walk along a road until a store, you might picture me standing outside. But if I walk to the store, you assume I went inside.

Rabbi Abraham Isaac Kook, noticing the two different prepositions, interpreted them in this way: ad (“until,” “up to”) conveys the Jewish people’s physical return to their homeland, language, and culture. It is the first step in teshuvah: approaching, although not fully attaining. El (“to”), in contrast, connotes a complete return, all the way to God. For Rav Kook, a staunch Zionist, aliyah was a prerequisite of complete return to God. It is only after the Jewish people make aliyah and build the Land, he continues, that they merit the divine assistance mentioned in this same passage: Then the Lord your God will open up your heart and the hearts of your offspring to love the Lord your God with all your heart and soul, in order that you may live (Deuteronomy 30:6). Barriers cast aside, Israel will do complete teshuvah and return all the way to God.

We read Parshat Nitzavim the week before Rosh Hashanah. We find ourselves deep into the season of repentance, a time for spiritual reflection and moral introspection. As much as we commit ourselves to change and promise ourselves we will chart a new course, sometimes we start along the path but falter or get stuck in a rut. We have high hopes for self-improvement, but sometimes we do not entirely fulfill them.

Rav Kook taught that we learn something significant from these two tiny prepositions -- ad and el. Coming all the way “to” full and all-encompassing teshuvah is not the only thing of value. Coming “up to” means we have achieved partial success, and this too is precious in God’s eyes. This means that we should acknowledge and value what we have accomplished even if we have not yet reached our end goal. God gives partial credit.

Partial change leads to greater change. It’s a step in the right direction, and is, by itself, worthwhile and significant. It is success in its own right. Think back for a moment on the changes you had hoped or promised yourself last Rosh Hashanah that you would make this year. Don’t think about the goals you didn’t reach; think about the progress -- even small steps forward -- that you made. God gives partial credit. Please give yourself partial credit. A new year is unfolding before you -- a year of opportunity.

In December 1993, the Space Shuttle Endeavor blasted off its launching pad on a mission to repair Hubble. It was among the most complex missions NASA had ever undertaken. For 10 days, seven astronauts worked tirelessly to install the correct optics, replace the Wide Field and Planetary Camera, replace the solar arrays and four of Hubble’s gyroscopes as well as numerous electrical components, and upgrade her computers. 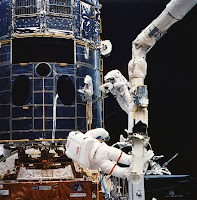 In January 1994, NASA released the first of the now much sharper images produced by Hubble. 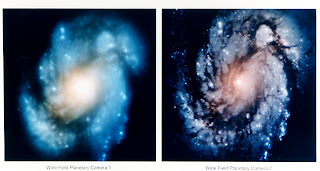 (Hubble images before and after the repair of the mirror)

I mention the service mission because it was the first of five service missions to Hubble. Each approached solving all Hubble’s problems. Each accomplished a partial repair, a partial solution. Each took steps forward. Each gets partial credit.

May our efforts toward change and self-improvement -- incremental for most of us -- be fruitful. May we always remember that God gives partial credit, and follow that model.