Religion as a battering ram / Vayishlach

Whether or not Dinah is kidnapped, whether or not she is in love with Shechem, and whether or not Shechem truly loves her after raping her, one thing is uncontested: the sons of Jacob use the sacred covenantal rite of circumcision as a weapon of slaughter. When Shechem and his father Hamor come to ask permission for Shechem to marry Dinah:

Jacob’s sons answered Shechem and his father Hamor, speaking with guile because he had defiled their sister Dinah, and said to them, “We cannot do this thing, to give our sister to a man who is uncircumcised, for that is a disgrace among us. Only on this condition will we agree with you; that you will become like us in that every male among you is circumcised. Then we will give our daughters to you and take your daughters to ourselves; and we will dwell among you and become as one kindred. But if you will not listen to us and become circumcised, we will take our daughter and go. (Genesis 34:13-17)

They speak b’mirmah (with guile). We shouldn’t be as shocked as we are when we learn that the purpose of the scheme — at least in the minds of Shimon and Levi — is not to merge two peoples, but to weaken the Shechemites. But we are most certainly appalled when we learn that while the Shechemites are healing and most vulnerable, on the third day after their circumcisions, Shimon and Levi enter the city with drawn swords. They slaughter all the males and more:

They put Hamor and his son Shechem to the sword, took Dinah out of Shechem’s house, and went away. The other sons of Jacob came upon the slain and plundered the town, because their sister had been defiled. (Genesis 34:26-27)

Torah emphasizes that the purpose of the horrific butchery is to free Dinah and avenge her rape. (And let’s not overlook that they then plundered the town.) Could they not have recovered Dinah in any other way? How could they possibly justify killing every male to free their sister? How did they manage to execute this plan without Jacob having a hint of it? And if Jacob knew, why did he not intervene?

Beneath these troubling questions is yet one more: What are we to make of the use of a sacred Jewish rite — brit milah — as a means to weakening people so they can be overpowered and killed? 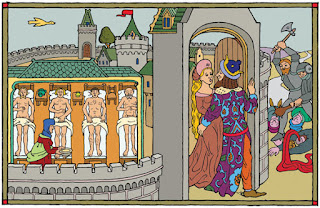 There is no shortage of people who claim that religion does this all the time, and they have no difficulty marshaling evidence:

Historically, the Church used its teachings about heaven, sin, and salvation to control great numbers of people and threaten them with eternity in the fires of hell, as well as to justify countless massacres, the Inquisition, and witch hunts. Today “sacred Christian values” are evoked to coerce public policies and laws that violate other people’s values and rights (specifically contraception and reproductive rights).

Islamic teachings from the Qur’an have often been used to relegate non-Muslims in Muslim countries to second-class citizenship (dhimmi). In our time, sacred religious texts and promulgations of imans have provided both motivation and justification for horrific terrorism.

In Judaism, threats of God withholding the fullness of olam haba (the world-to-come) have been used to coerce people into observing Judaism in a manner a select few deem correct and defaming other streams of Judaism, which keeps them in the seat of power, at least in their communities. Sacred text has been used by “Settlers” in Israel to justify murder and the destruction of mosques.

This is not to say that all Christians, Muslims, and Jews engage in such behavior. In fact, it is a small minority. But it a shameful thing to do.

Jacob’s response to the massacre his sons have wrought is distressing and disheartening.

Jacob said to Shimon and Levi, “You have brought trouble on me, making me odious among the inhabitants of the land, the Canaanites and the Perizzites; my men are few in number, so that if they unite against me and attack me, I and my house will be destroyed.” (Genesis 34:30)

Where is Jacob’s moral condemnation? Jacob’s only concern is for himself, and he couches everything that way: “me,” “my men,” “attack me,” “I and my house.” This is not the model we would hope for. Lacking that, we must be the models out in the world who call our co-religionists to a higher level of accountability, and reject their use of sacred texts, rites, and traditions as weapons to attack — within the Jewish community and beyond it, as well.