The ritual of the red heifer is confusing, self-contradictory, arcane, and downright bizarre. But this is far from a new or modern observation.

First: what is it all about? Torah instructs that a pure red heifer be sacrificed outside the Israelites’ encampment (and later outside the Temple) and burned completely to ashes. The ashes, when mixed with water are sprinkled on a person who is in a state of ritual impurity through contact with the dead, and is thereby purified — yet the priest is rendered ritual impure by making the sacrifice.
Midrash (Numbers Rabbah 19:8) records that Rabban Yochanan b. Zakkai, who lived through the destruction of the Second Temple in 70 C.E. (after which, there was never again the sacrifice of a red heifer), faced the sort of questions people ask today. I will interpolate comments throughout the midrash.

An idol worshiper asked Rabban Yochanan ben Zakkai: “This ritual that you perform seems like witchcraft. You bring a cow, burn it, pound it, and take the ashes; then you sprinkle upon one who has become impure by contact with the dead two or three drops and say to him, ‘You are purified!’”

In a later age, Rashi comments that the other nations taunted Israel on account of this ritual, saying, “What in the world is this?” Nachmanides[1] adds to Rashi’s comment: “The reason the other nations heap scorn on Israel about this more than they do about any of the other sacrifices of expiation or of purification [Nachmanides has in mind the purification rituals after a woman gives birth] is because the animal is slaughtered outside the sacred enclosure. It therefore appears to have been offered in the open… to the goat demons (Leviticus 17:5,7). But the truth is that it is meant to transfer the spirit of uncleanness outside the encampment — so even though it is burned in the open, it is the same as the ‘pleasing odor’ of sacrifice being offered.” Where Rabban Yochanan fielded accusations of witchcraft, Nachmanides heard accusations of paganism. As I said, it’s a bizarre ritual. 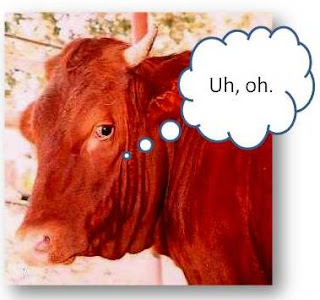 Is Rabban Yochanan b. Zakkai saying that Torah’s ritual is no different from the pagan’s ritual? It helps to pay closer attention to the verse from Zechariah that he quotes. He quotes only the second half because it mentions “unclean spirits,” which resonates with the idolater. The first half of the verse, which the midrash presumes the reader either knows or will look up, says: In that day, too — declares the Lord of Hosts — I will erase the very names of the idols from the land; they shall be uttered no more. In this way, the verse appears to affirm the rituals of the idolater, thereby convincing him of the legitimacy of the Red Heifer ashes, yet is entirely delegitimizes his practice!


After he [the idolater] had left, his students said to him [Rabban Yochanan ben Zakkai], “Our Master, you put him off with a reed, but what would you say to us?” He said to them, “I swear: The dead do not make one impure, and the water does not purify. Rather, the Holy One praised be God said, ‘It is a ritual law that I have enacted; it is a decree that I have decreed. You may not transgress My decrees, as it is written, This is the ritual law.’”

Rabban Yochanan explains to them that the law of the Red Heifer is a chok: it is a commandment that can neither be explained nor understood. But it must be obeyed.

Once there was a synagogue where they had an unusual tradition. As they recited the Amidah, they would begin facing east, and slowly turn 360 degrees counter clockwise, completing the Amidah facing east again. Visitors enquired about this tradition, but no one knew its origins. It had always been thus. There came a time when the synagogue needed renovation. Workmen came and began by stripping off the wallpaper. What did they find? They saw that long, long ago, before the time that everyone had printed prayerbooks, the words of the Amidah were written on the walls of the synagogue, near the ceiling, beginning to the left of the Holy Ark, and continuing all the way around.

Some rituals are clouded in mystery. The Red Heifer may well be one we never truly understand. Yet it does not brand all ritual silly, bizarre, and meaningless. Rituals capture a holy moment, or a holy event, and preserve them for us so that we can experience them again and again and again. Consider the Passover seder: through it we relive the experience and meaning of the Exodus and Redemption year after year. Consider lighting shabbat candles and making Havdalah: through them we are reminder that we delineate and mark holy time for it to be real in our lives.

The notion of a ritual shrouded in mystery, without reason or meaning, does not sit well with everyone. This, too, is not new. Our midrash includes a d’var acher, another explanation of the Red Heifer, more suited to one who finds the notion of unexplainable chok unpalatable and insufficient:

And why are all the sacrificial animals male, but this one is a female? Rabbi Aivu said, “This can be explained by a parable: The son of a handmaiden dirtied the king’s palace. The king said, ‘Let his mother come and wipe up the filth.’ So too, the Holy One, praised be God, said, ‘Let the cow come and atone for the incident of the Golden Calf.’

As archaic, arcane, and bizarre as the Red Heifer ritual seems to us, R. Aivu’s explanation doesn’t make it more comfortable or enlightening to most Jews in the 21st century. Yet there is something about R. Aivu’s explanation that I appreciate, and it is this: R. Aivu lived in Babylonia in the third century C.E., long after the anyone had a clue about the ritual of the Red Heifer (if ever anyone did). Yet he felt free to make sense and meaning of it.

That is what we continue to do, studying our sacred texts to wrest from them new insights and meaning to live our lives better. This is what we do with our rituals and traditions. We invest them with new meanings to uplift, encourage, and inspire. The proliferation of Passover haggadot is an excellent example of the energy invested in this process. This is not to say that every tradition should be preserved and justified. There is a Demotivator poster that expresses it best: At the top is a picture of the Running of the Bulls in Pamplona. The caption below says: “Tradition: Just Because You’ve Always Done It That Way Doesn’t Mean It’s Not Incredibly Stupid.” But R. Aivu does open the door and invite us into the process, which has been ongoing for three millennia, and to which we continue to make wonderful contributions, not only for own spiritual benefit, but for future generations, as well. 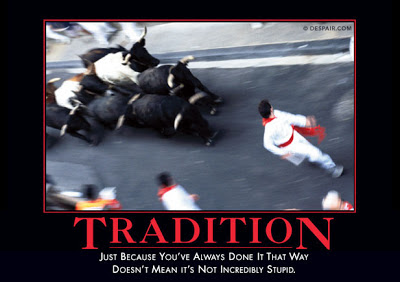