How are Donald Trump, the Trail of Tears, and Parshat Mase’ei connected? The removal of people considered “Other.”

I have watched the back and forth between Donald Trump and Gold Star parents Ghazala and Khizr Khan in complete disgust. Trump is so convinced of the depth of the well of hatred and fear in this country toward Muslims that he has attacked and maligned with impunity a family whose patriotism and sacrifice are due honor and should elicit our thanks. It seems unimaginable that any reasonable, thoughtful, and rational American could, for a moment, think otherwise. Yet Trump 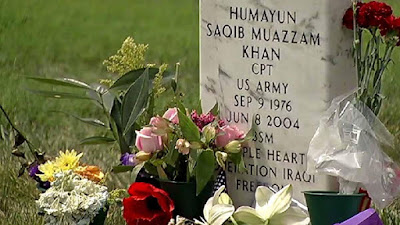 never backs down; he doubles down.

Trump again and again dips his bucket into that deep well of American bigotry to attack Muslims, Mexicans, women, the disabled, and African Amaericans. Americans do not have a monopoly on bigotry, to be sure, but it is alarming and dismaying how high the water level in the well is. Far too many people see anyone different as “Other” and jump straight to suspicion, contempt, fear, and hatred—the emotions that fuel Trump’s campaign for the American presidency.

It has become common today to hear people say, “Throw them out,” “Send them home,” and “Get rid of them–they don’t belong here” when speaking of Muslims in this country. They are speaking of our neighbors and co-workers. Yet these sentiments (and far worse) drip from the mouths of Americans and are all over the internet. They sound alarmingly like things heard in Germany in the run-up to the Second World War and the Holocaust. And while I am not saying that we are headed in that direction, language not only reflects deeply held feelings, but influences people powerfully.

The current (and disgraceful) episode in our history recalls an earlier episode in which the impetus to remove the “Other” was shamefully realized. In the 1830s, fueled by James Madison’s concept of “Manifest Destiny” and the lust for land and riches on the part of European Americans (spurred on by the discovery of gold in Georgia), President Andrew Jackson rammed the Indian Removal Act of 1830 through Congress. This paved the way to what became known as the Trail of Tears.[1]  Between 1830 and 1850, massive numbers of members of six Indian nations[2] were forcibly removed from their ancestral homelands in the Southeast and “relocated” to the west, marched hundreds of miles under the watchful and cruel eyes of American militias and soldiers. More than ten thousand Natives died en route of starvation, disease, and exposure.

Throughout human history, ethnic and religious groups have seen those different from them as “Other” and justified dispossessing them of their land and even annihilating them. We find these very ideas—and an account that claims this happened—in this week’s Torah portion, Mase’ei. The passage in Mase’ei I have in mind can rightly be called a text of terror. The feminist biblical scholar, Phyllis Trible, made famous the expression “texts of terror” to describe stories in the Hebrew Bible of violence and misogyny—neglect, abandonment, rape, and dismemberment of women—in the context of God’s stunning silence and lack of opposition.[3] Parshat Mase’ei, which we read together with Parshat Matot this week, includes yet another “text of terror.” As disturbing as is God’s silence in the face of brutality against women, this account is alarming precisely because God is not silent here: worse yet, God commands violent action and possibly genocide.

In the steppes of Moab, at the Jordan near Jericho, Adonai spoke to Moses, saying: Speak to the Israelite people and say to them: When you cross the Jordan into the land of Canaan, you shall dispossess all the inhabitants of the land; you shall destroy all their figured objects; you shall destroy all their molten images, and you shall demolish all their cult places. And you shall take possession of the land and settle in it, for I have assigned the land to you to possess. You shall apportion the land among yourselves by lot, clan by clan: with larger groups increase the share, with smaller groups reduce the share. Wherever the lot falls for anyone, that shall be his. You shall have your portions according to your ancestral tribes. But if you do not dispossess the inhabitants of the land, those whom you allow to remain shall be stings in your eyes and thorns in your sides, and they shall harass you in the land in which you live; so that I will do to you what I planned to do to them. (Numbers 33:50-56)

Our first inclination upon reading this passage might be to cringe. Our second might be to attempt to avoid it. But it isn’t going to disappear from the pages and parchment of Torah. Let us use it, then, to learn.

Let us consider history—genuine history. It sounds like this passage arises from the great “Us-versus-Them” divide, wherein people often see those who are different from them as utterly alien, undesirable, dangerous, and threatening. In the extreme, the “Other” is to be banished or even killed.  To understand this passage, however, we need to be aware that it was not prescriptive. The passage was written much later than the purported events—at least 600 years later. Historians tell us that the ancient Israelites and Canaanites were similar in many ways and lived contemporaneously in the land. The development of distinctive cultures and religions was a slow process of differentiation. This story reflects a long period wherein Israel developed a unique identity and saw itself as different from the surrounding peoples, in particular because Israel rejected idolatry and worshiped Adonai. The perspective expressed in the Book of Numbers (see also Deuteronomy 7:1-6 and 12:29–13:1) is a retrojection, whereby an imaginary past conquest was projected into the distant past to explain how Jews had come to be a nation in the Land of Israel.[4] The stories of the conquest, many of which are in the Book of Joshua, are inspired by a religious agenda. Riddled with inconsistencies, discrepancies, and implausible accounts (including numerous miracles), they are far from anything we would call “history.” In addition, archaeology not only fails to bolster the biblical accounts, but strongly disputes their claims.[5]

Bottom line: There was no conquest; it never happened. Mostly likely, biblical Israel began and evolved in the Land of Israel. There are scholars who hold that, in the ancient world, the claim to have conquered a land, as opposed to being the indigenous people in a region, was considered to convey stronger rights to the territory. (This is the opposite of how we think about such matters today, when we would say that the fact that the Israelites were the indigenous people, rather than  conquered from without, is a stronger claim.) Hence there is no legitimate mandate for conquest, although there are strong ties to an ancestral homeland.

What, then, do we do with the biblical stories of the conquest of Canaan? I would advise that we not view them through a naive and mindlessly literalistic lens, but rather use them as we use all Torah: to learn how best to live in covenant with God and make the wisest, most moral decisions we can make. Torah puts the question of “othering” people and dispossessing them of their land on the table and we must face it with all the honesty, integrity, and morality we can muster.

What is hateful to you, do not do to another person. That is the entire Torah; the rest is its commentary. Go and learn. (BT Shabbat 31a)

This teaching bids us to ask: What are Muslims in American feeling in the face of the raw animosity spewed by Trump and his followers? Try for a moment to imagine what it is like to be a Muslim in America today. When the BBC asked Muslims in America to explain in five words how they feel, their responses included:
“Nervously laughing but actually terrified.”
“Heartbroken, ignored, dehumanized, misjudged…hopeful.”
“Peaceful, but they hate me.”
“I love my hateful country.”

Clearly, attacking all Muslims in America as the Trump camp has done, doesn’t pass the R. Yehudah sniff test. Far from it. Hillel and R. Yehudah ha-Nasi’s teachings help us see the need to adamantly and vociferously repudiate the repugnant and morally bankrupt ideas we are hearing and reach out a hand of friendship and support to Muslims in our communities and spheres.

Here is more of what Muslims in America told the BBC:
“Americans are better than Trump.” [Let’s hope so!]
“This is my home. PERIOD.”
“I wouldn’t live anywhere else.”

We need to do far better.

[1] The term “Trail of Tears,” was originates with Cherokees who were forcibly relocated between 1830 and 1850, but has come to be used to described the entire sordid chapter of “removal” during these two decades.
[2] The Cherokee, Chickasaw, Choctaw, Creek, Muscagee, and Seminole peoples, along with freed Africans and slaves who lived among them.
[3] Trible challenges those who open the Bible seeking religious values to direct human moral behavior, to confront these problematic stories and their lingering contribution to ongoing misogyny. Trible’s challenge applies equally well to this week’s parashah.
[4] Mostly likely, much of the story of the Exodus is also a retrojected national myth. Some scholars suggest that biblical religion developed indigenously in the Land of Israel, but the people felt a need to create the myth that they came from without and conquered the Land.
[5] The most famous example is the city of Jericho: Archaeology has demonstrated that Jericho was not even inhabited in the 13th century B.C.E.
Posted by Rabbi Amy Scheinerman at 2:29 AM