A casual reader of Parshat Toldot could be forgiven for thinking this portion is about Abraham rather than his son Isaac. Many familiar motifs are found here: a patriarch with a barren wife who ultimately gives birth, famine in the land causes the patriarch to leave, the patriarch tells his wife to protect him by claiming she is his sister, and more talk of wells. Concerning the wells, which Torah terms be’er mayyim chayyim (“well of living water”), Torah tells us:

The Philistines stopped up all the wells that his father’s servants had dug in the days of his father Abraham, filling them with earth. And Abimelech said, “Go away from us, for you have become far too numerous for us.” So Isaac departed from there and encamped in the wadi of Gerar, where he settled. Isaac dug anew the wells that had been dug in the days of his father Abraham and which the Philistines had stopped up after Abraham’s death; and he gave them the same names that his father had given them. But when Isaac’s servants, digging in the wadi, found there a well of spring water, the herdsmen of Gerar quarreled with Isaac’s herdsmen, saying, “The water is ours.” (Genesis 26:15-19)

What does the story about Isaac digging anew the wells of his father mean? The Sages offer three suggestions: Peace, Torah, Life.

R. Chanina said, “If one sees a well in a dream, he will see peace, as it says, Isaac’s servants, digging in the wadi, found there a well of living water (Genesis 26:19).” R. Natan said, “He will find Torah, as it says, Whoever finds Me finds life (Proverbs 8:35), and it is written here, a well of living water.” Rava said, “It literally means life.” (BT Berakhot 56b)

The image of Isaac digging anew the wells of his father, Abraham, has inspired many other beautiful interpretations: never give up; hold close and cherish the traditions of your parents/ancestors; become a well of Torah for others; the fullness of life sometimes flows beneath the surface of our lives and to find it we must dig down. For others, there is a concrete message here about the scarcity of water resources and the importance of equitable distribution of water rights, important in many locales around the globe today.

I’d like to share yet another way to view the account of Isaac digging out his father’s wells, which is inspired by two interesting questions in tandem: Why is there so much talk about digging, filling, and re-digging wells in Genesis? And why are only Abraham and Isaac involved in digging the wells, but not Jacob? A Kabbalistic interpretation to these questions is offered by the late Shlonimer rebbe, Sholom Noach Berezovsky (1911–1981), the spiritual leader of a small but vibrant hasidic group that originated in Shlonim in Belarus. [1] (For some background on Kabbalistic thinking that will aid in appreciating the Shlonimer rebbe’s interpretation, please skip to the bottom of this drash and read that material now.) Concerning the wells of Abraham and Isaac, Berezovsky writes:

The wells represent the specific middah (attribute), the approach to serving God, in which each of the patriarchs specialized. Abraham’s well was a source of chesed (kindness) and ahavah (love); Isaac’s brought forth din (justice) and gevurah (strength). Jacob is associated with tiferet (beauty), an amalgam of chesed (kindness) and gevurah (strength). It did not reveal a new facet of God for people to relate to, but combined the teachings concerning two middot that were by this time already known to others. Jacob did not discover and reveal a new middah, so much as re-engineer two older ones. It makes perfect sense that Jacob does not dig wells of his own. (Netivot Shalom, Toldot)

The Shlonimer rebbe’s reference to divine attributes—middot or sefirot—is familiar to those who have studied Kabbalah. The story of wells reflects Kabbalistic cosmology in his mind. The wells of Abraham symbolize the emanation of chesed (kindness)/ahavah (love), the sefirah traditionally associated with Abraham, into the world. Isaac digs anew the wells of his father, and then his servants dig additional an “well of living water” that bespeaks the emanation of gevurah (strength)/din (justice), the sefirah traditionally associated with Isaac, into the world. Jacob, however, who is associated with the sefirah of tiferet (beauty), does not dig any wells. Tiferet, the Shonimer tells us, is not a wholly new and different divine attribute, but rather a combination of the two that came before, the two associated with Abraham and Isaac. The first important lesson here: Not everyone brings something new and original into the world. Some people's contributions arise from re-engineering what already exists or has been discovered into new and useful forms to benefit others. In our society, which places so much emphasis on “originality” and “creativity” and “novelty,” and often deprecates the contributions of so many because they did not give birth to something wholly new and unprecedented, this alone is a reassuring message. Most of us—if any of us!—come up with something unprecedented and ground breaking, yet our contributions can be exceedingly important and meaningful to the world. Intellectual advancement, scientific research and discovery, and art all progress incrementally, building on the accomplishments and insights of those who came before. Each generation, each practitioner, “stands on the shoulders of giants.”

The Shlonimer rebbe goes even further. He says that sometimes we cannot sustain the progress we have made backslide or lose ground. Who hasn’t experienced this? Sometimes our best efforts are “vandalized”—the wells fill up and we cannot draw water from them for a time. Sound familiar? Two steps forward, one step back. This happens; we shouldn’t allow it to demoralize us, because even if we cannot recognize it in the moment, we have not lost everything. Our efforts and accomplishments have not evaporated and disappeared. Everything we have become and done affects the world permanently. Our achievements have influenced the world and their imprint remains. All the good we done—every generous deed, every kind word, every effort to ascend spiritually—is secured. None of it is lost. No good is ever wasted or lost. Ever.

[1] Rabbi Sholom Noach Berezovsky was sent to live in Palestine when he was young. Most of his family perished in the Holocaust, and most of the Shlonimer community was wiped out. Rabbi Berezovsky built a new community in Israel.

There are many ways to interpret Torah, many lenses through which to view the stories. One lens is Jewish mysticism. Among the pre-eminent books of Jewish mysticism is the Zohar (“The Book of Radiance”), which purports to be written by a second century rabbi named Shimon bar Yochai. [2] According to Talmud, R. Shimon hid in a cave for thirteen years to avoid Roman persecution. The legend arose that during those thirteen years R. Shimon studied Kabbalah and wrote the Zohar, a mystical interpretation of Judaism that reveals the hidden truth of Torah. The Zohar is quite explicit in its claim that to be properly understood, Torah must not be interpreted merely on the level of p’shat (contextual meaning)— p’shat cannot reveal the depth of its truth.

Rabbi Shimon said, “Woe to the human being who says that Torah presents mere stories and ordinary words! If so, we could compose a Torah right now with ordinary words, and better than all of them! To present matters of the world? Even rulers of the world possess words more sublime. If so, let us follow them and make a Torah out of them. Ah, but all the words of Torah are sublime words, sublime secrets! (Zohar 3:152a)

Yes, Torah looks and feels like a book of stories and laws, but that is merely appearance, the Zohar tells us:

Torah is a disguise composed of stories and laws that contains, conceals, and safeguards the truth of ultimate reality. Yes, they can understood as “mere stories and ordinary words” but what is holy and divine about that? Anyone can write stories—even better stories. The mission of the mystic is to strip away the concealing garments and reveal the inner truth, to see through the body (apparent, physical reality) and into the unseen, but not unknowable, soul of the universe. For the Zohar, and many forms of Jewish mysticism, Torah is an allegory of ultimate truth, a window on Reality, which is God.

For Kabbalists, God is manifest in the world, and the world came into being, through ten sefirot, emanations of attributes of the Divine which can be thought of as traits of God or as archetypes of existence. Kabbalists often arrange these in a “tree” diagram, which may be familiar to you. (Please see the diagram below.) The sefirot are a way of talking about the abstract  structure of reality, the meaning and purpose of life. They are a way of identifying holiness in our lives and in our world. They are also the kabbalists’ map of the universe: the universe is composed of the divine traits of God erupting and flowing into the world to be made manifest. The understanding behind that notion is that the world is filled with the divine; indeed, the universe is all contained within the divine, within God. The secret of the unity of God (as we affirm when we say Shema) is that all is contained within God, all is One. God is the Ein Sof (“without end”)—the Infinite One.

[2] The Zohar was actually written in Spain in the 13th century by Moses de Leon. 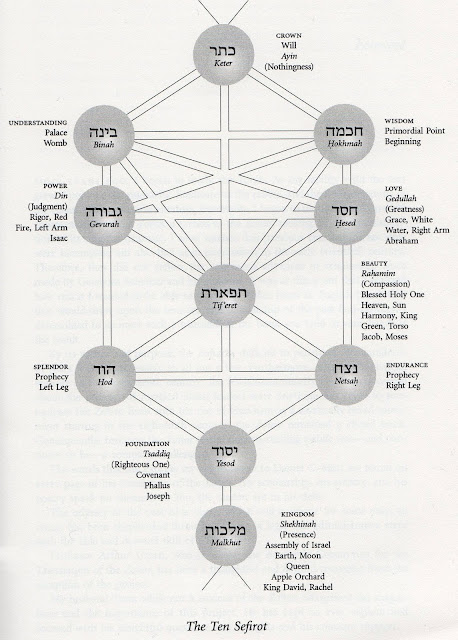 Posted by Rabbi Amy Scheinerman at 11:51 AM