Chaos Theory is a branch of Applied Mathematics. The core insight of Chaos Theory is that small changes (or turbulence) in the initial conditions of a system can result in enormous and diverging differences in outcome that, although determined by the initial turbulence, are not predictable. In 1972, mathematician and meteorologist Edward Lorenz published a seminal paper in the field, whose title encapsulates the fundamental realization of Chaos Theory: Predictability: Does the Flap of a Butterfly’s Wings in Brazil set off a Tornado in Texas. Chaos Theory has applications to physics, economics, microbiology, meteorology, politics, and even philosophy. It’s also a pretty good model of our lives.

Our lives are chaotic processes in the mathematical sense. Small changes beget unforeseen transformations and even violent eruptive changes. If we are pleased with the outcome we call it growth; if we are not we call it catastrophe. And because it is unpredictable and often unnerving, we may seek to rein it in by imposing order and structure. 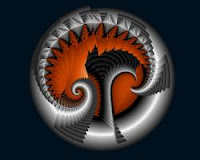 The Book of Numbers (Sefer B’midbar), the fourth book of Torah, recounts our ancestors’ trek through the wilderness, from the “first day of the second month in the second year following the exodus from the land of Egypt” (Numbers 1.1) until Moses stands on the steps of Moab, preparing to address his people for the last time before ascending Mt. Nebo to die. For four decades, the Israelites follow a circuitous and winding route through the wilderness, cohering as a nation, learning to live as free people committed to God’s Torah, encountering existential perils and internal hazards. Forty years of Chaos Theory in action: every small event has large and unpredictable consequences down the road.

Yet B’midbar opens with a recitation of the first census take in the Wilderness. Chapters 1 and 2 consist of a long litany of names and population numbers – tribe by tribe – to assess how many men were available to serve as foot soldiers in defense of the fledgling and exceptionally vulnerable Israelite nation. In the Hebrew trop (traditional chanting) this long passage with many repetitive phrases is almost singsong, much like the ditties of young children in which the world is portrayed as organized, under control, and comfortably predictable. Chapters 1 and 2 tell us precisely how the Israelites encamped in the Wilderness: the Ohel Moed (Tent of Meeting) was erected in the center, and the tribes were arranged in a meticulously specified array around it – four groups of Levites surround the Tent on each of the cardinal directions; a division of three tribes encamped behind them, each with its own flag. A rigid, military configuration; everyone assigned a precise place. The very idea of a census to raise a standing army acknowledges unforeseen dangers. At the same time it suggests that the perils of the Wilderness can be controlled, contained, and overcome. 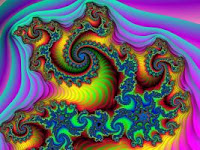 As the Jewish community turns yet again to B’midbar in our annual cycle of reading, we again breathe the Israelites’ rarified air of naïve confidence in organization and control. Yet we, who return to this parashah year after year, know what will transpire over the next 38 years. In the coming ten weeks we will recount the failed mission to reconnoiter the Land of Israel, the revolt of Korach and his minions, the traumatizing deaths of Miriam and Aaron, numerous battles, egregious idolatry, and numerous internal rebellions. All this is punctuated by hunger, thirst, fear, complaints (endless complaints), greed, and plague.

Torah’s description of the Israelites’ encampment is a remarkably apt metaphor for our lives: we attempt to impose structure and order on our lives, but then life happens (remember the bumper sticker?). Small perturbations beget enormous oscillations and changes. We struggle to recover, regain our balance – and most often we do – but we come out transformed. Perhaps underlying our resilience is that ideal of organization and control, the image of the Israelite tribes arrayed peacefully in the Wilderness around the Ohel Moed (Tent of Meeting). The primordial image of order (think of the Garden of Eden) assures us that it is possible to get our feet back on the ground even amidst chaos.

What was your Wilderness experience? Was there a formative or life-altering event in your life that led to significant transformation? Perhaps it happened in childhood, college or graduate school, in the crucible of parenthood or grandparenthood. Perhaps you’re traversing the Wilderness now.

It helps us to remember that in chaos there can be great beauty, including the revelation of our resilience, strength we never knew we had, and growth. There are insights and truths we acquire along the trek, and the relationships formed and deepened along the journey – these are often truly beautiful. Chaos Theory has also spawned a beautiful offshoot: geometric fractals. A fractal is a beautiful figure with recursive structure keeps repeating itself again and again on an increasingly small scale. (The graphics in this posting are fractals. My favorite demonstration of how a fractal is formed is the Koch snowflake that begins as a Magen David, and forms an increasing intricate structure as the 6-pointed star is replicated at each point again and again. You can see an animated version of the process here: http://en.wikipedia.org/wiki/Koch_snowflake.)

Sven Geier, who works at the Jet Propulsion Laboratory of CalTech, loves fractals and has made many of his creations available for your pleasure and enjoyment. You can find them at: http://www.sgeier.net/fractals/indexe.php. Perhaps you’ll find one you’d like to use as your background for a while to recall that often beauty emerges out of chaos. 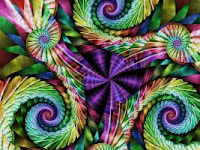