The curse of Narcissus, the requirements of the priesthood / Parshat Emor

In an essay for the Los Angeles Times, Victoria Looseleaf wrote last January:

With Darren Aronofsky's Oscar-nominated ballet thriller, "Black Swan," lasering in on rail-thin physical perfection… coupled with the firestorm created by New York Times dance critic Alastair Macaulay's sniping that ballerina Jenifer Ringer looked as if she'd "eaten one sugar plum too many" in a recent "Nutcracker" performance, the notion of body fascism — placing a value on one's physical appearance — is flaming on today's cultural radar.

From the first moment a human saw his or her reflection in a body of water (recall the legend of Narcissus?) people have cared about human physical perfection beauty. The Greeks immortalized their version of human perfection in marble. In how many societies throughout the ages have those who do not "rise" to the perceived level of beauty or physical "normalcy" been made to feel inherently inferior or inadequate? 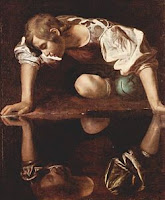 Parshat Emor opens with instructions to the priests, sons of Aaron, including this:

The Lord spoke further to Moses: Speak to Aaron and say: No man of your offspring throughout the ages who has a defect shall be qualified to offer the food of his God. No one at all who has a defect shall be qualified: no man who is blind, or lame, or has a limb too short or too long; no man who has a broken leg or a broken arm; or who is a hunch back or a dwarf, or who has a growth in his eye, or who has a boil-scar, or scurvy, or crushed testes. (Leviticus 21:16-20)

The reader may be troubled by these rules disqualifying physically handicapped kohanim from officiating in pubic. Perhaps their disfigurements would distract the worshipers from concentrating on the ritual and, like the offering of the blemished animal, would compromise the sanctuary’s image as a place of perfection reflecting God’s perfection (cf. Lev. 22:21-25, where similar language is used for the animals brought to the altar).

Etz Hayyim offers us two possibilities, neither of which succeeds. Can anyone believe that people who are physically different from the “norm” might be distracting in a society where many people (as in any society) have disabilities and deformities and there existed no orthopedic or plastic surgery to remediate even a fraction of them? And even if we could buy this reasoning, shouldn’t Torah be teaching compassion? Wouldn’t God’s acceptance of kohanim (priests) with disabilities and deformities be a powerful example?

The second suggestion, that the priests should be perfect physical specimens just as the animals offered for sacrifice had to be without blemish, derives from a mistaken notion that Jews at that time considered God “perfect.” Simply reading the Torah disavows us of that. God frequently misjudges, changes his mind, and revokes decisions. The notion of God’s perfection (like God’s omnipotence) derives from medieval Christianity, and while it is true that many Jewish philosophers of that era adopted it, it post-dates the Bible by more than a millennium. It is Israel that sought to give God the "best" of what they had -- a lesson learned from Cain and Abel -- and construed "best" as requiring physical "perfection."

This passage begs for interpretation in an age where steroid use is rampant, anorexia has spiked alarmingly (there are websites with tips on how to starve yourself and sport the claim that anorexia is a “lifestyle choice”), those who are physically disabled still lack full access to our buildings and our society, and those who do not tow the straight heterosexual line continue to face discrimination and physical assault.

The quest for, or value placed on, human perfection and the myth of "normalcy" is all-consuming for some, harmful to the esteem of many, and downright dangerous for others.

A young woman named Chrissy Lee Polis was so savagely beaten in a McDonalds restaurant in Baltimore two weeks ago, that she had an epileptic seizure. As the beating – by two teenagers – went on and on, one employee videotaped it all with his cellphone and another stood back watching and laughing. Why? Because Chrissy Lee Polis is transgendered.

Human physical perfection is a myth – and a very dangerous one at that. Mishnah teaches us to always see the individuality and uniqueness of each soul and distance ourselves from the sort of language and thinking that objectifies people. Mishnah tell us:

Mishnah doesn’t mention people-without-disabilities, people who are heterosexual, people who are gorgeous, or people who qualify to be kohanim serving in the Tabernacle. Every person is precious. The Mishnah continues:

And [a single human being only was created at the time of Creation] to also proclaim the greatness of the Holy One. If a human being stamps several coins with the same die, they all resemble one another. But the Supreme Ruler, the Holy One, stamps all human beings with the die of the first human being; and yet not one of them resembles the other. Therefore every human individual is obligated to say: For my sake was the world created!” Mishnah teaches us to remember always that each human being is unique and unparalleled.

Could there be a more beautiful exaltation of human diversity? The Mishnah wants us to revel in human variety. This is not to say that we are happy about those who suffer from disabilities; we do everything in our power to help them reach their goals. But we may not devalue them or disregard them.

In the extreme, the attitude that people with disabilities, deformities, and differences are “less than” leads to what we saw in the 1940s. This past Sunday was Yom haShoah, a day of solemn memorial for six million of our people who were systematically murdered because they were deemed to be biologically – and hence morally – inferior: virus or contagion among humanity.

The Nazis also went after the disabled. The “Law for the Prevention of Progeny with Hereditary Diseases” (1933) mandated the sterilization of those who had conditions considered hereditary, including mental illness, physical deformities, epilepsy, learning disabilities, blindness, and deafness. Later, sterilization of the disabled gave way to mass murder.

For there to be change, it must begin with us – each and every one of us. We must, if we haven’t already, confront our own inner prejudices so we can value people without reference to their beauty, abilities, bodies, or sexuality. We must come to revel in the diversity around us. When we look into the eyes of another person, we must train ourselves to see not someone who is beautiful or not, perfect or not, fully abled or not, heterosexual or not, but rather, we must see in the countenance before us the image of God peering back at us.

Vicky Thoms knows this in her gut and she lives it. Thoms entered the McDonalds while Chrissy Lee Polis was being brutally beaten. Although Thoms was recovering from a back injury, she intervened. Chrissy’s attackers kicked Vicky Thoms in the head, but that didn’t deter her. Later, when someone asked whether Thoms knew that Polis was a transgendered woman, Thoms replied, “No, I didn’t, and I don’t care.” Vicky Thoms has been lauded a hero, but she doesn’t see herself that way. When asked why she took such a risk to intervene, Thoms quoted a verse from last week’s Torah portion, “Because the Bible tells us not to stand idly by.” Check out Leviticus 19:16 – lo ta’amod al dam rei’echa “do not stand idly by while your neighbor bleeds – that’s a value to live by.

I don’t have an answer to why the Torah tells us that the priests must be “without defect” to serve in the Tabernacle, but I do know that the requirement for physical “perfection” should never be generalized or normalized. It was then and there, and there we should leave it. Yet imagine with me the message that would have been delivered had Torah said:

The Lord spoke further to Moses: Speak to Aaron and say: Every one of your offspring throughout the ages is qualified to offer the food of his God. I, the Lord your God, cherish each individual, whether blind, or lame, or with a limb too short or too long; with a broken leg or a broken arm; or a hunchback or a dwarf, or with a growth in his eye, or a boil-scar, or scurvy, or crushed testes. They are all precious to Me.