The time to hesitate is through
No time to wallow in the mire
Try now we can only lose
But vision lifts our spirits higher.

In a sense this is Joseph’s story, and it is the story of Chanukah, as well.

Miketz, and next week’s parashah, Vayigash, contain perhaps the most emotional narratives in Torah. Joseph does not cry when his brothers throw him into the pit, or when they sell him to a traveling caravan of Midianites, or when Potiphar throws him into the dungeon. Yet Joseph, overcome with emotion, weeps four times. (The first two instances are in this week’s parashah and the second two are recounted in parshat Vayigash.)

Joseph cries first when he hears his brothers speak among themselves about the plan to leave Shimon as a hostage in Egypt until they bring Benjamin from the land of Canaan. In their conversation, the brothers acknowledge and take full responsibility for the egregious way they treated their brother Joseph.

The brothers said to one another, “Oh we are being punished on account of our brother! We saw his soul’s distress when he pleaded with us -- on that account his distress has come upon us.” Reuben now responded to them, saying, “Didn’t I say to you, ‘Do not sin against the lad’! But you wouldn’t listen, and so his blood-payment, see -- it has come due.” (Genesis 42:21-22)

The second instance is when Benjamin, Joseph’s only full brother, is brought to Joseph:

With that, Joseph hurried, out, for he was overcome with feeling toward his brother and was on the verge of tears; he went into a room and wept there. (Genesis 43:30)

Later, having planted a valuable goblet in Benjamin’s pack as a pretext to accuse Benjamin of theft and toss him in jail, Judah, the eldest brother, makes a long and impassioned speech about his father Jacob (who is Joseph’s father, too, of course) in which Judah says that if Benjamin does not return with his brothers, their father will die of grief. Judah offers himself as ransom for Benjamin and for a third time, Joseph is overcome with emotion. He sends his servants from of the room and reveals himself to his brothers. This time he not only weeps, but wails:

His sobs were so loud that the Egyptians could hear, and so the news reached Pharaoh’s palace. (Genesis 45:2)

And finally, when Jacob comes down to Egypt and Joseph sets eyes on him for the first time in so long, we are hardly surprised that Joseph weeps a fourth time:

Joseph harnessed his chariot and went up to meet his father Israel in Goshen; he presented himself to him and threw himself on his neck, weeping all the time. (Genesis 46:29)

If Joseph does not cry at the most frightening and potentially deadly moments in his life, why does he weep these four times? All four instances involve steps in the process of reunion and reconciliation with the people closest to him -- his brothers and father. These tears are mixed with pain, no doubt, but each time Joseph cries, it is because he has come closer to the vision of wholeness, reconciliation that has supported him through his years of ordeal.

What makes Joseph cry are glimpses of his vision fulfilled, milestones along the way to achieving it. Joseph is moved by his brothers' repentance. When they express remorse for how they treated Joseph, and take responsibility for it, Joseph is overcome. He is overcome again when Judah puts bones on that remorse and acceptance of responsibility by offering himself as ransom for Benjamin. Joseph sees that the brothers have truly changed; they are not the same jealous, vindictive, self-righteous siblings who cavalierly threw him into a pit without water and then proceeded to picnic (Genesis 37:24-25). Reconciliation is possible; healing is possible. Wholeness is within reach.

Joseph also cries when he first sees Benjamin and Jacob -- his two closest connections to his mother, Rachel, who died when he was but a lad.

When we examine what is most important and meaningful in our lives, it is probably what we cry about. I think of the people on Wall Street who threw themselves out of windows when the stock market crashed; it is clear how they defined their very being. For Joseph, his primary relationships with family define who he is and he desperately needs to rectify these relationships. Joseph remains broken until the breach is repaired.

Miketz is always read on the Shabbat during Chanukah, which is also known as Chag ha-Urim, the festival of lights. Chanukah is about light (or vision) fueled by dedication that led to a miracle.

Let’s take those three -- vision, dedication, and miracle -- in reverse order. The Chanukah miracle was not really the big, splashy kind, like the Parting of the Reed Sea, but rather a small miracle. The cruse of oil -- one tiny clay jar, a one-day supply -- was barely visible in the piles of rubble on the Temple Mount. Yet the Rabbis tell us it was sufficient to kindle the Temple lamp and keep it burning for eight days (b.Shabbat 21b). A legend, to be sure, but as with all rabbinic legends, this one is replete with a deeper meaning. Miracles are how we see things. They arise from within us and are set in motion through our dedication, our willingness to take risks and keep plugging for what we believe is right. That light, or vision, that helps us see what the end might look like, even when we’re tired, or scared, or unsure of ourselves, fueling and refueling our dedication. The Maccabees had a clear vision: sovereignty in their land, restoration of the Temple worship, freedom to live as Jews. That vision fueled, and many times refueled the dedication they needed to persevere through three long years of hiding in caves and conducting a guerilla war against their Hellenistic overlords. With a clear vision and dedication to that vision, they achieved victory in a war any historian would have said was impossible to win. The miracle of the lamp is the miracle they wrought. 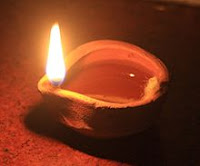 Joseph, too, worked a miracle. Who would have believed that reunion and reconciliation with his family was possible when the brothers sold him into slavery, or when Potiphar cast him into the dungeon, or when Pharaoh made him grand vizier and married him off to the daughter of an Egyptian priest? Yet Joseph kept before him a vision of return and restoration to his family. He dedicated himself to that vision. He wasn’t unrealistic; he wanted assurances that his brothers had changed, had repented, felt remorse. These assurances brought him to tears because he recognized in them yet another miracle in a series of miracles that brought him closer and closer to his vision, closer and closer to the light.

The time to hesitate is through
No time to wallow in the mire
Try now we can only lose
But visions lifts our spirits higher.

So here’s something to ponder: What makes you cry? What is your vision? What is most important to you? What keeps the cruse of oil inside you burning? With whom are you going to share your light and your miracle?