The Jewish world is abuzz over the letter-to-the-editor that appeared this week on the august pages of the New York Times, penned by an Episcopal chaplain at Yale University. (Given that three of our kids — both daughters and our son-in-law — are pursuing PhDs at Yale, this one came across my screen in a nanosecond.) The Rev. Bruce Shipman informs us that Jews are the cause of anti-Semitism, that “time-honored” apologetic in the Christian anti-Semitism arsenal, long condemned by all decent Christians. Here is Rev. Shipman’s shameful letter:

Deborah E. Lipstadt makes far too little of the relationship between Israel’s policies in the West Bank and Gaza and growing anti-Semitism in Europe and beyond.

The trend to which she alludes parallels the carnage in Gaza over the last five years, not to mention the perpetually stalled peace talks and the continuing occupation of the West Bank.

As hope for a two-state solution fades and Palestinian casualties continue to mount, the best antidote to anti-Semitism would be for Israel’s patrons abroad to press the government of Prime Minister Benjamin Netanyahu for final-status resolution to the Palestinian question.

Not a word condemning Palestinian violence, ranging from the rockets continuously fired at Israeli civilians since Israel withdrew from Gaza in 2005[1], nor mention of the extensive attack tunnels uncovered in Gaza this summer, clearly built to foment a massacre of Jews.  And no mention of Hamas’ charter, which is rivaled only by Mein Kampf for its rabid anti-Semitism and call for Jewish genocide. What is more, Rev. Shipman has demonstrated the now easily recognized one-sided condemnation and hatred of Israel that is a guise for anti-Semitism. Dressing it up with a clerical collar, it will be viewed by many as old-fashioned Christian-sponsored permission to hate Jews.

We can chalk off Rev. Shipman as a died-in-the-wool, no-longer-closeted anti-Semite (no doubt he would protest that some of his best friends…). We can also wonder how Yale University will respond, given that Rev. Shipman certainly seems to be in violation of his signed Agreement with Yale (see the link at the bottom of this page http://chaplain.yale.edu/yrm for a copy of the Agreement). I’d like to focus, however, on the climate that makes someone like Rev. Shipman believe it is acceptable to express such appallingly immoral and reprehensible views.

Associated Press journalist Matti Friedman, who covered the Middle East from AP’s Jerusalem bureau from 2006 to 1011 wrote just this week[2]:

The lasting importance of this summer’s war, I believe, doesn’t lie in the war itself. It lies instead in the way the war has been described and responded to abroad, and the way this has laid bare the resurgence of an old, twisted pattern of thought and its migration from the margins to the mainstream of Western discourse—namely, a hostile obsession with Jews…

Friedman goes on to say that, “The world is not responding to events in this country [meaning Israel], but rather to the description of these events by news organizations.” And what the news organizations feed the world is any thing but unbiased journalism. Here’s how consumers of what passes for news these days “know” what we “know” and come to opinions and conclusions we believe we can support and defend:

Palestinians are not taken seriously as agents of their own fate… Who they are and what they want is not important: The story mandates that they exist as passive victims of the party that matters [i.e., Israel].

Corruption, for example, is a pressing concern for many Palestinians under the rule of the Palestinian Authority, but when I and another reporter once suggested an article on the subject, we were informed by the bureau chief that Palestinian corruption was “not the story.” (Israeli corruption was, and we covered it at length.)

Israeli actions are analyzed and criticized, and every flaw in Israeli society is aggressively reported… In a very conservative estimate, this seven-week tally was higher than the total number of significantly critical stories about Palestinian government and society, including the totalitarian Islamists of Hamas, that our bureau had published in the preceding three years.

The Hamas charter, for example, calls not just for Israel’s destruction but for the murder of Jews and blames Jews for engineering the French and Russian revolutions and both world wars;[3] the charter was never mentioned in print when I was at the AP, though Hamas won a Palestinian national election and had become one of the region’s most important players.

Perhaps you’re thinking that I’ve lost sight of this week’s parashah. I haven’t. On the Buzzfeed list of popular biblical verses we are sure to find this one from Parshat Shoftim:
צֶדֶק צֶדֶק, תִּרְדֹּף--לְמַעַן תִּחְיֶה וְיָרַשְׁתָּ אֶת-הָאָרֶץ, אֲשֶׁר-יְהוָה אֱלֹהֶיךָ נֹתֵן לָךְ.
Justice, justice shall you pursue, that you may thrive and occupy the land that the Lord your God is giving you. (Deuteronomy 16:20) 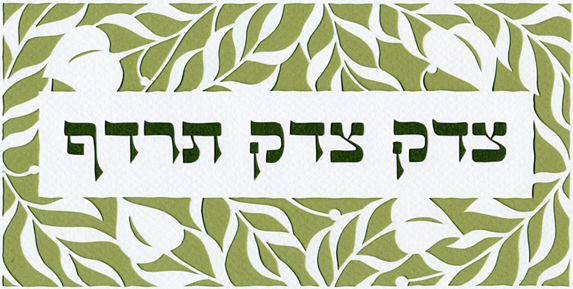 To note that this verse is overused is a vast understatement. It has been employed to justify most anything people wish to defend. Slapping this general statement about the pursuit of justice onto an apologetic for injustice does not remove the tiger’s stripes. While Rev. Shipman did not trot out this verse, his argument was a justification for anti-Semitism. One can easily imagine him claiming that “injustice” done to Palestinians in Gaza justifies attacks on Jews in Europe and elsewhere around the world; he’s only a half-step away from making that claim.

Much has been made of the double use of צֶדֶק tzedek (“justice”) in Deuteronomy 16:20. Many have pointed out that this doubling testifies to what a high priority justice, fairness, and decency are to the Torah, which is altogether true. But digging deeper, the S’fat Emet (Rabbi Yehudah Aryeh Leib Alter, 1847–1905) wrote:

Justice, justice shall you pursue. There is no final depth or end to justice and truth; we always have to go deeper, seeking out the truth within truth. It is not “true” until the person is entirely unified and prepared for God’s service. Thus אמת (“truth”) contains the first, middle, and last letters of the Hebrew alphabet. The Yehudi of Pryzysucha taught that the word “justice” is repeated here to say that even in the pursuit of justice, you have to engage justly, without lies.

The S’fat Emet is saying far more than that justice is a primary priority for, even the core purpose of, Torah. I think he is warning us that what we deem to be “justice” needs re-examination. It’s easy to arrive at a simplistic and incomplete understanding of justice based on appearances, minimal information, or the sloppy reporting that passes for journalism these days. It’s easy to arrive a simplistic and flawed understanding of justice when we scrutinize and absorb only one narrative and do not take the time and suffer the pain and discomfort to probe another narrative. When we arrive at what we think is just, and the behavior we think justice requires of us, Torah tells us צֶדֶק צֶדֶק, תִּרְדֹּף  Justice, justice shall you pursue — look further, think deeper, double-check your assumptions, reconsider your conclusions, be ever vigilant that you have arrived a genuine justice, and are not stuck at a way-station of bias, bigotry, and ignorance. This is a prescient reminder, and divine wisdom, not only for the Rev. Shipman, but for all of us.

As for Rev. Shipman, I cannot resist passing along a comment by George Mason University professor of law, David Bernstein:

Next on Rev. Shipman’s bucket list: blaming women who dress provocatively for rape, blaming blacks for racism because of high crime rates, and blaming gays for homophobia for being “flamboyant.”[4]

© Rabbi Amy Scheinerman
[1] Palestinians have fired in excess of 11,000 rockets into Israel since 2005. http://www.idfblog.com/facts-figures/rocket-attacks-toward-israel/
[2] http://www.tabletmag.com/jewish-news-and-politics/183033/israel-insider-guide?all=1
[3] You can read the charter for yourself in English translation, posted here by a group that is certainly no friend of Israel: http://www.thejerusalemfund.org/www.thejerusalemfund.org/carryover/documents/charter.html?chocaid=397.
[4] http://www.washingtonpost.com/news/volokh-conspiracy/wp/2014/08/25/leftists-hamas-and-nazis/
Posted by Rabbi Amy Scheinerman at 8:17 AM