Equality for women has progressed in fits and starts in America, but on a global scale, the news is alternatively uplifting and terrifying. Boko Haram, a Sunni Islamic fundamentalist sect in Nigeria has abducted more than 500 women and children—including the 276 school girls from Chibok last April—to abuse and sell as slaves. Human Rights Watch reports that ISIL fighters are buying and selling ethnically Kurdish Yazidi women and girls. An article in ISIL’s English language recruiting magazine, Dabiq, asserts, "We will conquer your Rome, break your crosses, and enslave your women.” Both groups justify using women and girls as sex slaves on the basis of Islamic theology (a notion soundly rejected as a perversion of Islam by the Muslim world at large). CNN’s Ben Wedeman accurately characterized ISIL as living out an “apocalyptic fantasy of rape, enslavement, and mass murder under a thin shroud of religion.” It makes the continuing gender inequality in the United States seem trivial in comparison.[1]

It is often claimed that we find such primitive and egregiously immoral views in the Bible. Contrast the accounts on the front pages of America’s newspapers, then, with the account in this week’s parashah of Rebekah. Abraham has sent his trusted servant Eliezer to Haran to find a wife for his son, Isaac. Eliezer encounters Rebekah at a well. She invites him home, and Eliezer showers her with gifts of silver and gold, as well as clothing, asking her to go with him to a place unknown and far away to marry a man she has never met.

Poet Amy Blank envisioned Rebekah a dreamy romantic fantasizing about the man she would marry. Rebekah is so innocent that she takes her childhood toys with her; perhaps she is young enough to still play with them?

I left home easily
(as when the ready seed drops from the tree),
Carefree—for I knew not what…

I stuffed my toys into the saddle-bag
braided my hair and for that dusty journey
wore my bordered gown.
I chose my camel and set out, light-hearted,
to enjoy adventure—scarcely a pang
as tents and trees of home faded into wilderness.
But this I wondered:
how would it befit to ask that awesome man,
Abraham’s servant, what manner
was he to whom I was betrothed?
Better to hold the question, I decided.
Isaac, after all was also kinsman—one more—
fabulous Abraham’s son—and I,
I would be his daughter…daughter?sister?wife?
Hardly a difference in my young mind.

Torah, however, tells the story of a woman, not a girl. Rebekah, we are told, is a betulah, a woman of marriageable age (Genesis 24:16) who is old enough and strong enough to draw water for all of Eliezer’s camels (Genesis 24:20). In fact, the text repeatedly calls her a na’ar (young man), which in synagogue is read na’ara (young woman), perhaps to underscore her strength of mind and body. There is no deception in Eliezer’s interchange with Rebekah, no attempt to exploit or abuse her, and there is no coercion either. In fact, Rebekah’s family acknowledges her adulthood, leaving the decision of whether to return with Eliezer in Rebekah’s hands:

When they got up in the morning, [Eliezer] said, “Send me off to my master.” [Rebekah’s] brother and mother said, “Let the girl stay with us another few days—ten, perhaps— afterward she may go.” But he said to them, “Do not delay me, now that Adonai has cleared the way for me; send me off and let me go to my master.” They answered, “Let us call the girl and see what she has to say.” So they called Rebekah and asked her, “Will you go with this man?” And she said, “I will go.” Then they sent their sister Rebekah off with her nurse, with Abraham’s slave, and with his men, bestowing this blessing upon Rebekah: “Sister, may you become thousands of myriads…” (Genesis 24:54-60)

What is more, it is Rebekah who chooses her husband Isaac’s successor to the Abrahamic covenant. Isaac favors Esau, but Rebekah is determined that Jacob is the better suited of the brothers, just as Sara saw to it that Isaac (and not Ishmael) succeeded Jacob.

This is not to say that Judaism has achieved equality of the sexes across the board, for certainly that is far from the truth. The Reform, Reconstructionist, and Conservative streams have, for the most part, achieved egalitarianism.  However, a large swath of the Jewish community continues to live as if it is the 19th century, or for that matter the 10th century, pretending that in the 21st century it is morally acceptable to live with the cruel inequality of women in marriage and divorce, in positions of religious and ritual leadership, and in matters of eidut (testimony), usually intoning the line that often betokens a lack of insight and imagination: “that’s how we’ve always done it.” 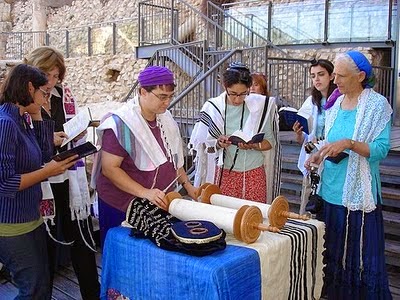 There are no longer any excuses. The process of halakhah does not prevent change and it lies in human hands, as the Babylonian Talmud boldly asserts; used properly, halakhah facilitates a fluid change in response to moral sensibilities. We have a halakhically sound alternative to Kiddushin[2] that obviates the gross inequality of divorce and the problem of agunot[3] because divorce does not require a get: Brit Ahuvim[4]. Rejecting women eidut[5] is totally indefensible; women are equally reliable and trustworthy. The notion of kol isha[6] is offensive to both women (painting them as dangerous sirens) and men (painting them as animals without self-control). Suggesting that giving women an aliyah or inviting them to lead prayers and read Torah would be insulting to men is absurd; the very same men see women doctors, use the services of women lawyers, and must produce their licenses and registration for women police officers when asked. It’s 5775. 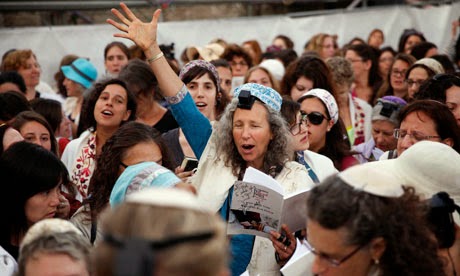 [1] Fewer than one-fifth of Congress and one-fourth of state legislatures are women. The United States ranks last in a list of 20 industrialized countries in a measure of government, societal, and business support for working women; assessment examined family leave, alternative work arrangements such as part-time employment and flex-leave. Among the 20 countries assessed, only the United States lacks paid parental leave mandated by law. Maternity leave at full pay is offered to only 16% of female employees in the United States. Discrimination in employment hiring, promotions, and salary continue. On top of this is the headlong conservative political assault on women’s rights to make decisions concern their own bodies and reproduction.
[2] Jewish marriage, Kiddushin, is in its essence a covenant of acquisition in which a man acquires a woman. It creates the problem of one-sided divorce, in which, to end a marriage, a man must of his own free will, give a woman a get, a divorce decree. He cannot be compelled. Therefore he can also withhold a get to extort money or simply out of vengeance. Without a get, the woman cannot remarry.
[3] An agunah is a woman whose husband refuses to give her a get. She remains technically married and unable to marry another man, although her husband is free to marry another woman.
[4] Brit Ahuvim, an alternative to Kiddushin, is the brain child of Rachel Adler. It was further developed by her son and daughter-in-law, Rabbis Amitai Adler and Julie Pelc Adler. It is fully explained and documented at: http://therabbisadler.blogspot.com/2012/07/brit-ahuvim-20-new-standard-halachic.html.
[5] Legal witnesses in a rabbinical court, usually to testify concerning personal status.
[6] Kol isha means “the voice of a woman” and refers to the supposed impermissibility of a man hearing a woman’s voice singing because, presumably, it will excited him sexually.
Posted by Rabbi Amy Scheinerman at 1:20 PM