This is an exceptionally full and rich parashah. It includes the account of the divine messengers who visit Abraham and Sarah to announce Sarah’s impending pregnancy, and inform Abraham of God’s intension to annihilate Sodom and Gomorrah, igniting Abraham’s sense of justice and effort to negotiate with God. Included also is the account of the divine messengers that come to Sodom to visit Lot, who is prepared to save them from the violence of the inhabitants at the cost of his daughters. Lot, his wife, and two daughters escape, but Lot’s wife looks back and turns into a pillar of salt. Abraham and Sarah visit Avimelekh, Isaac is born, Hagar and Ishmael are expelled and then rescued by God from death in the wilderness, Abraham prepares to sacrifice Isaac at God’s behest, and Rebekah is born. All the space of five chapters of the Book of Genesis.

Sandwiched in here is the bizarre story I mentioned briefly above concerning Lot’s wife. Poor woman! We know nothing of her life—not even her name—and only how she dies. Lot’s wife merely looks back for a brief moment, and as a result she forfeits her life.

The sun was rising over the land as Lot was going down to Tzoar, and Adonai rained upon Sodom and Gomorrah brimstone and fire—from Adonai—out of the heavens, overthrowing these cities and the entire plain, all the cities’ inhabitants and what grew in the soil. Lot’s wife looked back, and she thereupon turned into a pillar of salt (Genesis 19:23–26).

Why does she turn back? And why is she turned into a pillar of salt? Could she be struck by a morbid curiosity to view the disaster she is escaping? It’s difficult not to look, as we learn every time traffic is tied up by rubbernecking. Rashi considers her fate a punishment of the middah k’neged middah (“measure for measure”) variety. He is likely referring to a midrash in Bereishit Rabbah (51:5) where R. Yitzhak comments that Lot’s 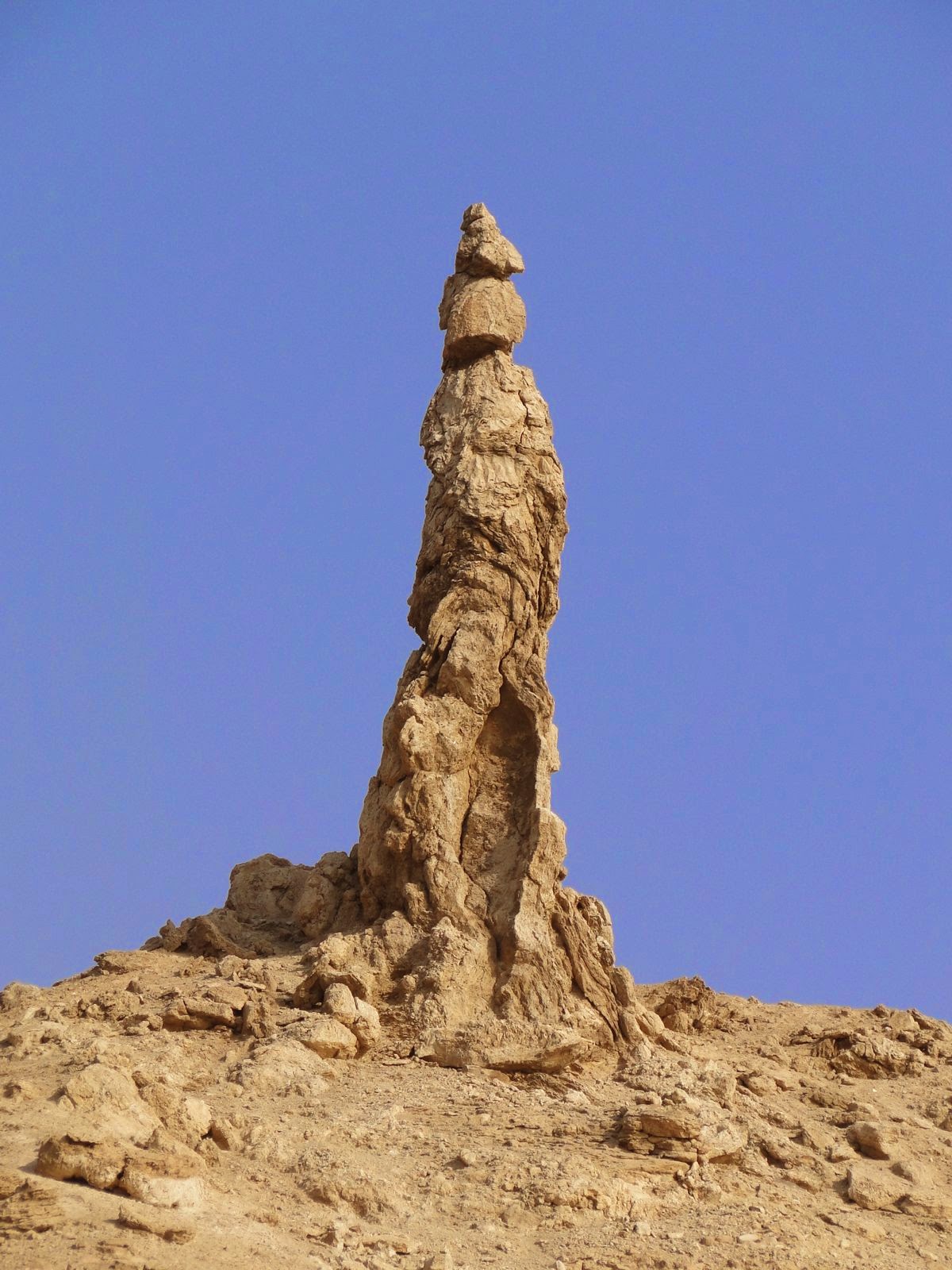 wife was turned into a pillar of salt because “she sinned through salt.” The Rabbis created a backstory for this interpretation: The night the divine messengers visited Lot, his wife, knowing the depths of the inhospitality for which the residents of Sodom were infamous, went about from neighbor to neighbor requesting salt for her guests. In this way, the people of Sodom were informed that strangers had entered their city, and they converged on Lot’s door demanding custody of the visitors with the intent to do them violence.

As dawn broke, the angels urged Lot on, saying, “Up, take your wife and your two remaining daughters, lest you be swept away because of the iniquity of the city.” Still, [Lot] delayed. So the men seized [Lot’s] hand, and the hands of his wife and his two daughters—in the Lord’s mercy on him—and brought him out and left him outside the city.

God intervened in the form of the divine messengers who seize Lot’s hand and escort him out of the city. What is more, Torah goes to the trouble to tell us that God’s intervention was an intensional act of mercy. Why is Lot’s delay (implicitly disobeying God) met with assistance, while his wife’s mere glance backward (which God never forbad) costs her her life? The traditional explanation that God punished Lot’s wife for looking back by turning her into a pillar of salt makes no sense to me.

Perhaps Lot’s wife has been misjudged by generations of readers who see the story as a simplistic one of disobedience and punishment.

Consider the possibility that Lot’s wife is concerned about the fate of the community she knows, her friends and neighbors who are experiencing a downpour of sulfurous fire from heaven. What must she have felt the previous evening as she watched as her husband, Lot, was prepared to hand over her daughters to a violent mob in order to protect compete strangers? Think of the pain she suffers for having left her daughters and sons-in-law behind in a city on the brink of extinction. Perhaps the salt is from the tears she sheds when she realizes what is happening and, like her remaining daughters, believes that the four who escaped Sodom are the only humans who remain alive in the world. Perhaps, as a result of witnessing the devastation and annihilation of her entire world, she dies inside. She is no longer able to move her body or function in the world. Trauma takes an enormous toll and PTSD is known to bring on a variety of severe reactions, including mental paralysis. Sleep paralysis is well documented among refugees[1] and has been noted in the folklore of other cultures.[2] Could Torah be preserving for us an ancient story of a refugee who suffered severe PTSD in the form of sleep paralysis? Or perhaps “emotional numbness,” a phenomenon noted by psychologists who work with women so beset by PTSD that they detach from the lives and bodies. Perhaps Lot’s wife is a literary description of such a woman. But most importantly, there is good cause in the text itself to rethink the traditional assumption that this is yet another story about disobedience to, and punishment from, God.

This reconsideration of the text occasions some thoughts about the confluence of judgment, reward-and-punishment, and shame: First, Torah is unfortunately mired in a theology of reward and punishment. The ancients explained the oscillations of history and the extremes of nature in terms of presumed divine judgment meted out to humanity. In the broader context of the story of Lot’s wife, we find epic judgment and punishment: two cities brimming with people are obliterated. The biblical perspective is clear: disobedience to God is shameful and brings down deserved divine punished. The Rabbis mitigated this theology to some extent, but perhaps not as much as we might like, and certainly not as much as we need. Lot’s wife is a case-in-point where the text does not support the ancient theological framework, yet the Rabbis adhere to it: midrash resorts to the explanation—beyond all reason—that Lot’s wife is punished for turning around, thereby needing to concoct a story to justify the claim.

Some 15 centuries later, we are often stuck in the reward-and-punishment mindset, both with regard to interpreting Torah and in our lives and relationships. We are too often quick to judge others and decide what they “deserve.” And we often treat ourselves no better, feeling we deserve the poor treatment or suffering that comes our way. (Recently, a friend told me that for most of his life he was unsure if God exists, but entirely sure that if there is a God, God inflicts punishment on people; not surprisingly, he can be pretty hard on himself.)

Perhaps we would do well to focus on God’s response when Lot hesitates leaving Sodom. God displays chemlah, compassion and mercy, shepherding Lot’s family out of the destruction.

In the extreme, the judgment-shame mindset, which gives rise to the reward-and-punishment view of God, initiates incalculable violence and pain. We can learn a great deal from psychiatrist James Gilligan, who wrote Violence: Reflections on a National Epidemic in 1997. Dr. Gilligan grew up in a violent home. His surgeon father beat his brothers ruthlessly and although everyone in town saw the bruises on the boys, no one ever intervened. Gilligan began working with violent patients in prison while completing his residency at the Harvard Medical School teaching hospital. He says he found himself

…face to face with the deepest human tragedies on a daily basis. And I mean not just the tragedies these criminals had inflicted on their victims, but also the tragedies they themselves had been victims of in the course of their lives.

What I found was that the most violent among them, and many of those who weren't even at the highest level of violence, had been subjected to a level of child abuse that was beyond the scale of anything I had even thought of applying that term to… the most violent people were really the survivors of lethal violence, either of their own attempted murders at the hands of one of their parents, or the actual murders of close family members who were often killed by other family members right in front of their eyes.[3]

I once knew a young boy, a resident in a psychiatric facility and school in Rhode Island. As a college student volunteer, I visited him each week. He had seen his father gun down his uncle in his own home. He did not speak and only moved when absolutely necessary. Week after week, I would take him for walks, show him games, read to him, yet it was as if he was only the empty shell, or appearance, of a child; it was as if he had died inside. Of course, that is not the case, but Lot’s wife reminds me of him.

In Violence: Reflections on a National Epidemic, Gilligan explains how shame, and its close cousin, disrespect, lie behind much of the violence committed by the most violent criminals. In an interview, he said that in his years treating the most violent offenders, he learned “that there was something about the human personality or the human soul or psyche, whatever you want to call it, that is sacred. There are just some things that you don't do to a person's psyche.” What don’t you do? Ignore people’s humanity, treat them with contempt and disrespect, and smother them with shame. There is a cycle of violence that is initiated and nourished by shame, the very same shame that is evoked by reward-and-punishment thinking. This is not to say that discipline is not important. It is crucially important. But the best forms of discipline do not rely on shame and the coercion of reward and punishment. Dr. Miki Kashtan writes concerning Gilligan’s work:

The intimate links between punishment and shame and between shame and violence are described and explored in painful detail [in Gilligan’s book]. Moreover, Gilligan convinced me beyond remaining doubt that the very system of punishment we have created is itself a form of violence, often enough taking the very same forms that the people being punished engage in.[4]

For far too long, we have trafficked in shame; it is a highly coercive and controlling force. For far too long, we have entertained the theology that God rewards and punishes in a capricious manner—like the worst of human beings—thereby justifying the same behavior in ourselves. We would do well to look, instead, to the acknowledgments of God’s patience and compassion, and find constructive ways to respond to those who hurt and offend us. Shame is crushing and fuels the cycle of violence.