Sports fan or not, the passing of Dean Smith z”l deserves our attention. The legendary UNC basketball coach died Sunday, February 8, 2015. Adored and admired in the sporting world, Dean Smith was an inspirational model for what it means to be a righteous human being far beyond the basketball court. Michael Jordan, who played for Smith, had this to say: “Other than my parents, no one had a bigger influence on my life than Coach Smith. He was more than a coach—he was my mentor, my teacher, my second father. Coach was always there for me whenever I needed him and I loved him for it. In teaching me the game of basketball, he taught me about life.” Indeed, Dean Smith has much to teach us all about how the “game of life” ought to be played; on the moral scale, he was a high scorer. 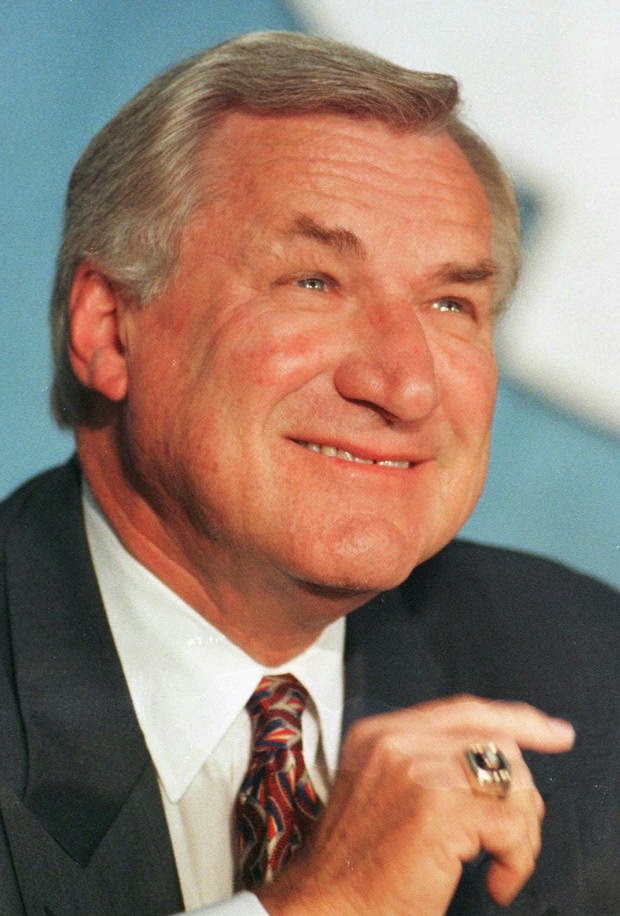 John Feinstein, who is writing a book about Smith, interviewed his pastor, the Rev. Robert Seymour, who recounted that when Smith arrived in Chapel Hill, he was appalled to learn that the restaurants in town were segregated. The two men agreed that Smith would patronize restaurants where he was known and bring black members of his church with him, pretty much forcing the restaurants to serve them. Thus began the integration of restaurants in Chapel Hill. When Feinstein asked Smith about this, he said he wished Rev. Seymour had not told Feinstein. Feinstein asked if he weren’t proud of what he had done. Dean Smith responded: “You should never be proud of doing the right thing. You should just do the right thing.”

Dean Smith found himself in a highly segregated culture in which equality—along the lines of color, religion, sex, politics, and socio-economics—was unthinkable, even unimaginable. Prof. Joshua Berman of Bar-Ilan University, the author of Created Equal, tells us that Tana”kh (Hebrew Scripture) was the Dean Smith of its day. In Berman’s own words[1]: “…the Pentateuch is history’s first blueprint for a society where theology, politics, and economics embrace egalitarian ideals, by reconstituting ancient norms and institutions….The Pentateuch, I claim, took aim at the socioeconomic structure prevalent throughout the ancient Near East: the divide between the dominant tribute-imposing class and the dominated tribute-bearing class.” And in the next breath, Berman notes that the italicized terms are borrowed from Norman Gottwald[2] and that, “it is hard to imagine us convening a session on the theme of equality and the Pentateuch had it not been for his life’s work around these ideas.” (Please note Berman’s humility; I’ll return to that in a moment.) He continues: “By rejecting social stratification, I mean rejecting the permanent and institutionalized power given to particular classes to control the economic, military, and political resources of society.” Does this sound like the Near East 2500 years ago? Or North Carolina in the 1960s? Or both?

This week we read Parshat Mishpatim, which is teeming with laws. It opens with the law of debt slaves[3]:

When you acquire a Hebrew slave, he shall serve six years; in the seventh year he shall go free, without payment. If he came single, he shall leave single; if he had a wife, his wife shall leave with him. If his master gave him a wife, and she has borne him children, the wife and her children shall belong to the master, and he shall leave alone. (Exodus 21:2-4)

To modern ears, this sounds barbaric. But not in the context of the ancient Near East. People who fell into debt often sold themselves into indentured servitude, but rarely succeeded in buying their way out. A master allowing a slave to go free? Unimaginable. Yet Torah draws a line and limits debt slavery:  Seven years maximum and then the master must release the slave. The once-indentured servant has a new chance at life and independence and dignity. And why? Because Torah seeks to move society from reality toward an idealistic vision in which there are no slaves and no one is poor or homeless. As Berman writes that throughout the “law codes” of Torah, “What we will see time and again is the way preexisting concepts and institutions in ancient Near Eastern culture are reworked according to a new agenda that advocates the attenuation of the socioeconomic hierarchy.”[4]

In fact, the term “law codes” is a misnomer because these passages are not juridical[5], but rather an expression of social values and aspirations. We find this passage in Exodus, the book that establishes redemption from slavery as the foundation of Jewish thinking and experience. Debt slaves were not released at the pleasure of the king, nor could the king countermand the release. As Berman notes, “The purpose of biblical law is to shape and form the polity, not merely to address cases and provide remedy.”[6] Torah seeks to inculcate values of egalitarianism.

The Rabbis take it a step further. Talmud explains that although slaves are to be released on Rosh Hashanah, it doesn’t not quite work that way. R. Ishmael the son of R. Yochanan b. Beroka taught that,

Why does the master keep his erstwhile slave for an additional ten days? Is this not tantamount to additional and illegal incarceration? In fact, the purpose is the opposite: For ten days the former debt slave transitions to free man. His former master makes him his equal by eating and drinking with him and treating him as a guest in his home, rather than a servant in his household. The Torah’s ideal, carried forward by the Talmud is clear:

Torah’s agenda is clear: Chisel away at the real to make room for the ideal.

Rabbi Menachem Mendel of Kotzk (1787-1859), commenting on וְאַנְשֵׁי-קֹדֶשׁ, תִּהְיוּן לִי You shall be to Me a holy people (Exodus 22:30) in this week’s parashah, teaches that kedushah/holiness should be realized in the human realm—in our lives, through our words and deeds. God does not wish us to be angels (God has plenty of them and can always create more) but rather fully human. The S’fat Emet (Yehudah Aryeh Leib Alter, 1847-1905) writes[7]:

In the name of the holy rabbi of Kotsk, on the verse,  וְאַנְשֵׁי-קֹדֶשׁ, תִּהְיוּן לִי You shall be to Me a holy people (Exodus 22:30). The guarding of holiness has to be within the realm of human deeds and activities. God has no lack of sublime angels, seraphim, or holy beings. But God longs for the holiness of people; it was for that reason that God caused sparks of holiness to enter this world, in measured and reduced form. Therefore, וּבָשָׂר בַּשָּׂדֶה טְרֵפָה לֹא תֹאכֵלוּ, לַכֶּלֶב תַּשְׁלִכוּן אֹתוֹ you must not eat flesh torn by beasts in the field; you shall cast it to the dogs (Exodus 22:30). From this the Rabbis derived the principle that anything taken out of its proper place is forbidden. This means that the flow of holiness is in all things, but in a measured way. We have to guard the corporeal, that it not transgress the border of holiness.

The S’fat Emet will now introduce his own take on תִּהְיוּן לִי (“you shall be to Me”). He understands it not as an imperative command, but as the outcome or promise of a life lived in spiritual holiness.

But תִּהְיוּן לִי (“you shall be to Me”) can also be read as a promise [rather than as a commandment]. In the end, Israel are to be “holy to God.” That is why we have to guard ourselves now, so that we are ready to be placed upon the King’s head. The midrash[8] says in a parable, “as many precious stones and pearls as you can put onto [the king’s crown], do so, for it is going to be placed upon the king’s own head.”

The Kotzker rebbe wants us to be holy in the fullness of our humanity. The S’fat Emet wants us to be holy because we see ourselves as the crown adorning God’s head. But are these views in opposition to each other? It is when we see ourselves—and all other people—as reflections of the divine, that we are motivated to ensure that all that we do and say are jewels in the divine crown; then we realize that genuine holiness in this world can only be affected by us, through our words and hands.

One more point: When the S’fat Emet asks us to see ourselves as jewels in the divine crown, he is not calling forth our hubris and egocentrism. To the contrary: he is reminding us that everything we do—from the smallest word of kindness to the great deeds of social justice—adorn God’s crown and enhance its sparkling brilliance, casting a reflection of divinity back on us. To live this way—to see ourselves as serving God’s desire for justice, equity, and kindness—requires enormous humility.

Joshua Berman, steeped in the Torah’s attempt to push society toward egalitarianism, expressed his humility in crediting another scholar with the terms and ideas that gave rise to his research. In 36 seasons coaching the Tar Heels, Dean Smith won two national championships and guided his team to 879 victories. Yet Smith was humble, and credited a long list of other people with the success. When he learned that the new basketball arena in Chapel Hill was to be named the Dean E. Smith Center, he was highly displeased, letting it be known that it should be named for the players, not for him. Personally, I’m glad the arena is named for a man whose values and deeds will continue to inspire so many.

© Rabbi Amy Scheinerman
[1] In a conversation with Saul M. Olyan, ed., The Journal of Hebrew Sciprtures, Volume 10, Article 9, doi:10:5508/jjs.2010.v10.a9 (available at www.jhsonline.org/Articles/article_137.pdf).
[2] Norman Gottwald has been described as an “American Marxist biblical scholar,” a term that sounds bizarre, even oxymoronic, but perhaps gets to the heart of this thinking about ancient Israelite sociology and institutions.
[3] Leviticus 25:35-54 and Deuteronomy 15:12-18 are also concerned with the manumission of debt slaves.
[4] Joshua Berman, Created Equal, p. 83.
[5] Biblical scholars posit three theories concerning the nature of ancient Near East “law codes”: (1) The king’s fulfillment of his obligations to the gods to justify his rule (for example, Hammurabi’s Code is seen in this light); (2) collections of legal problems and solutions; and (3) pedagogic training texts for judges.
[6] Berman, p. 200.
[7] S’fat Emet, Parshat Mishpatim 2:111.
[8] I think he’s referring to Pesikta de-Rav Kahana (piska 2): R. Yehudah bar R. Shimon told the parable of a man who sat making a crown for the king. A passerby saw him and asked him: “What are you making?” The man replied: “A crown for the king.” The passerby said: “Set in it as many emeralds as you can possibly set; set in it other precious stones—pearls, too—since the crown will be put on a king’s head.” So the Holy One said to Moses: “Moses, praise Israel as much as you can; praise them to Me; glorify Israel as much as you can; glorify them since I am to be glorified through them, And he said to me: You are My servant, Israel, in whom I will be glorified (Isaiah 49:3).
Posted by Rabbi Amy Scheinerman at 10:54 AM