The festival of Sukkot has become a reminder of our deep and abiding connection with the earth. Indeed, our lives dependent upon and inextricably interwoven with our fragile environment. Water is an integral part of Sukkot, in particular, because Sukkot not only celebrates the harvest at the end of the growing season, but  occurs at the time of year when the winter rains begin in the Land of Israel; the winter rains will determine whether the coming year will bring the curse of famine-induced drought or the blessing of abundance. When the Second Temple stood, each night of Sukkot featured the Simchat Bet haSho’avah (water-drawing ceremony), a Jewish Mardi Gras-like event celebrating the imminent return of rain after the long, dry months of summer during which no rain falls in the Land of Israel. With the stirring words of Isaiah 12:3 in mind, With joy shall you draw water out of the weeks of salvation, each morning during Sukkot priests went to the Shiloah Pool (pictured at the right as it appears today) 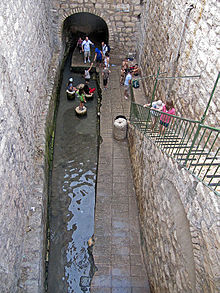 , filled a golden flask with water and, greeted by the blasts of a shofar, they would bring it back to the Temple through the Water Gate and pour the water over the altar together with wine. The evening relighting of the menorah in the Temple courtyard inaugurated a torchlit parade accompanied by Levites playing flutes, harps, trumpets, and cymbals. People danced and sang. The Talmud records that “one who had never witnessed the rejoicing at the place of the water-drawing had never seen true joy in their life.” (BT Sukkot 51b)

When I think about water on Sukkot, I also have rain in mind: I hope it holds off until Sukkot is over so that we can enjoy more time — dry and comfortable — in our sukkah. (Warm weather helps, too.) Today, many areas on our planet have serious concerns related to rain, but another water-related problem is rising sea levels due to global climate change: Human activity has released heat-trapping gases into our atmosphere. As a direct result, our planet’s seas and oceans are warming and expanding (this is called thermal inversion) and glaciers and the polar ice caps are melting. Over the past century, the Global Mean Sea Level has risen four to eight inches and the rate of increase has accelerated dramatically over the past two decades—and continues to do so. Recent studies predict that sea levels will rise between 2.5 and 6.5 feet by the end of this century. The result would be calamitous, and not merely to picturesque tourist destinations like Venice and Amsterdam. it would be disastrous to people living on the margins — economically, socially, and geographically — throughout the world.

We are accustomed to war leading to refugees and displacement, but now global climate change is begetting its first refugees. The first Americans to suffer the sting are members of the Biloxi-Chitimacha-Choctaw and the United Houma Nation, two Native American tribes living on the Isle de Jean Charles in the Louisiana coastal wetlands. Since the 1950s, their 15,000 acres have shrunk 98% due to rising sea levels, a consequence of global warming and melting polar ice. Today, the people of the Isle de Jean Charles have barely a quarter-mile by half mile strip of land on which to live, not nearly enough land to support their lives fishing, hunting, trapping and farming. Resettlement of the residents of the Isle de Jean Charles will disrupt their lives, culture, and community, and be both logistically challenging and extremely expensive. 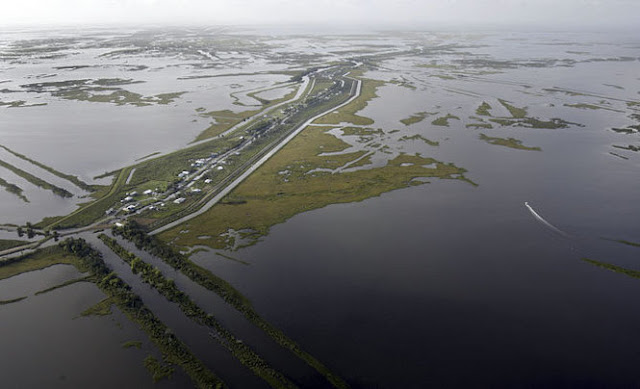 The approximately 60 Biloxi-Chirimacha-Choctaw and United Houma Nation are not alone in facing the prospect of  watching their beloved home sink below rising sea levels. Around the world, it is estimated that between 50 and 200 million people could be displaced within the next 35 years. The complexity of moving people, keeping families and communities together, is staggering, and often involves populations that are the poorest among the poor. The Federal Government has already designated $48 million to resettle the people of the Isle de Jean Charles — a staggering cost. 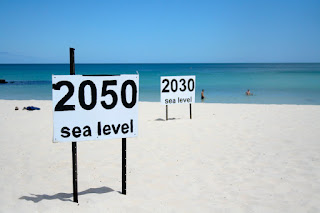 Rising sea levels have implications for the quality and salinity of groundwater. This effects water available for drinking water and agriculture. Rising sea levels disturb the ecological balance and diminish biodiversity in estuaries, coastal rivers, and already low-lying areas including tidal wetlands (consider the species that will be effected) and flat river deltas (including but not limited to the Amazon, Ganges, Indus, Mississippi, Niger, Nile, and Yangtze rivers). As is already evident, rising sea levels will increase the damage brought about by storms, floods, hurricanes and tropical cyclones; the resulting warmer waters and increased humidity will engender more tropical cyclones.

Water, so integral to the festival of Sukkot, is a life-sustaining blessing, but it can also be a life-threatening danger. Nature is a balancing act. Just as rain in the proper season and proper amount leads to a successful and nourishing harvest, so too oceans and seas at their proper levels sustain life for the plants and animals (including us) that inhabit the planet. Living outside in a sukkah reminds us of our intimate connection with the world around us. This includes the affect we are having on rising sea levels.