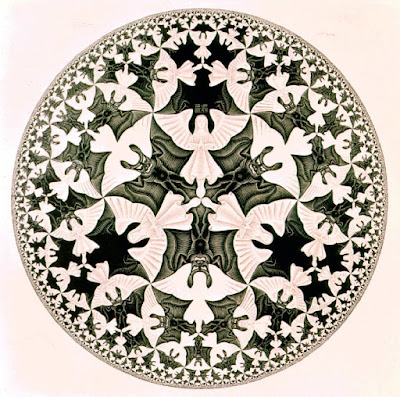 Do you recognize the design at the left? It is a woodcut by the Swiss graphic artist, M.C. Escher. Escher completed this piece shortly following his 62nd birthday. If you look closely, you will see that he has created a “sphere” of interlocking, tessellated angels and demons tiling the entire piece.

Most every culture and religious tradition has its versions of “angels” and “demons.” While there are significant differences in how these emblems of righteousness and wickedness are conceived and function, one commonality is that they open conversations about human moral behavior. Escher’s tessellated angels and demons seem to suggest that good and evil exist intermixed in close proximity in each of us. None of us is wholly good or utterly evil. We are like Escher’s woodcut: a mosaic of good and evil.

Parshat Noach addresses the subject of evil head-on; it tells the story of a flood that engulfed the world in God’s unsuccessful attempt to rid Creation of evil. According to the Torah, God brought the flood in response to human evil that has grown so violent and widespread, so vile and noxious, that God quite literally reverses Creation: the very waters that emerged from the Garden of Eden to water the world and make it habitable to plant and animal life now converge to erase virtually all life from the planet. Only one family and enough animals to reproduce and repopulate the world after the watery cataclysm survive, secured in a wooden ark that weathers the 40-day typhoon and many subsequent months of bobbing along on the ocean. Torah’s purpose is to explore God’s response to human evil. Torah does not flinch in telling us what a mistake God made, so much so that God vows never to repeat it—the rainbow serves to remind God of this promise. But Torah does not tell us why the people turned evil, only that they did.

When the Rabbis explore the story of the Flood, they first question Noah’s righteousness. Torah seems confident that Noah—and Noah, alone, in his generation—is righteous. ...Noah was a righteous man; he was blameless in his age... (Genesis 6:1) But the Rabbis question even this statement:

R. Yochanan tells us that Torah includes the seemingly superfluous words, “in his generation,” because had Noah lived in any other generation, he would not have been deemed righteous. The people in his generation were so evil that comparatively, Noah was good. Noah can only be considered good when compared with people whose wickedness and corruption were so extreme that God saw fit to destroy them. For R. Yochanan, Noah’s righteousness is a relative matter.  This is not a rousing accolade of Noah. R. Yochanan’s student, study partner, and brother-in-law, Reish Lakish, understands Torah’s comment entirely differently. “In his generation” exalts Noah’s righteousness: If Noah acts righteously even when everyone around him is wicked and corrupt, then he must be exceptionally righteous and he would certainly be deemed righteousness in any time or place. For Reish Lakish, Noah’s righteousness is an absolute fact, and all the more meritorious given the immoral environment in which he lived. R. Chanina and R. Oshayah offer parables that drive home their colleagues’ points about Noah’s goodness being relative or absolute. Given how much human behavior (our behavior!) is influenced by others, and how much people excuse with the words, “Everyone’s doing it!” the conversation of R. Yochanan and Reish Lakish gives us much to ponder.

When the Bavli (Babylonian Talmud) discusses the Flood story, the Rabbis seeks to identify if not the source of human evil then at least a significant source of evil. In doing so, they draw heavily from the Book of  Job, and in particular chapter 21, so let us turn to that text first. Job has been visited by his “friends,” Eldad, Bilhaz, and Zophar (friends like this you don’t need and I hope you are never afflicted with them). Finding Job in great distress and suffering (he has lost his children, as well as his flocks, herds, and wealth, and is stricken with painful afflictions), his visitors explain in excruciating detail that suffering is God’s recompense for evil. Since Job is suffering, they reason, he must have committed evil. That being the case, Job should acknowledge his evil, repent, and ask God’s forgiveness. Job is having none of it. He has lived a righteous life; he has been good and generous to other people and loyal to God. He tells his “friends” that they speak nonsense, since anyone can see that the world is inhabited by evil people who thrive.


Why do the wicked live on, prosper, and grow wealthy, and their children are with them always [recall Job’s children have all died] and they see their children’s children [Job will never see grandchildren]? (Job 21:7-8)

The Rabbis use the verses of Job’s caustic response to his friends’ assertion that suffering is God’s recompense for evil in order to craft a rabbinic explanation for a source of human evil. (They are italicized and noted in the paragraph below, which is found in the Babylonian Talmud, tractate Sanhedrin 108a.)

The Rabbis taught in a baraita: The generation of the flood became arrogant only because of the bounty that the Holy One Blessed be God lavished upon them. What is written concerning them? Their houses were secure, without fear; they do not feel the rod of God (Job 21:9). And it is written, Their bull breeds and does not fail; their cow calves and never miscarries (Job 21:10). And it is written, They let their infants run free like sheep, and their children skip about (Job 21:11). And it is written, They sing to the music of timbrel and lute, and revel to the tune of the pipe (Job 21:12). And it is written, They shall spend their days in happiness, their years in delight (Job 36:11), and it is written, They go down to Sheol in peace (Job 21:13). And this caused them to say to God: “Leave us alone, we do not want to learn Your ways. What is Shaddai that we should serve [God] What will we gain by praying to [God]?” (Job 21:14-15) They said: Do we need [God] for anything other than a bit of rain? We have rivers and streams from which to supply ourselves. The Holy Blessed One said, “With the very bounty that I lavished upon them, they are provoking me! With that [same bounty] I will punish them!” As it is said, As for Me — I am prepared to bring the flood (Genesis 6:17). (BT Sanhedrin 108a)

In the Talmud’s description, the generation of the flood enjoy the blessings of prosperity and, attributing their bounty entirely to their own hand, fail to recognize their indebtedness to God for the good fortune they enjoy. They come to the conclusion that God is superfluous to their lives, except perhaps for a “bit of rain”—the one thing they cannot purchase or manufacture. In the ancient world, when this text was written, rain was hardly a minor aspect of life, as “a bit of rain” suggests. It was all-important. Drought spelled disaster: famine could easily overtake even the wealthy. Yet those who were smugly secure in their wealth, seeing it as their entitlement rather than blessing, misjudge everything, including the vital importance of rain.

The Rabbis’ comments about evil that ensues from smug entitlement in the place of gratitude applies not only to the generation of the Flood, but to every generation. Torah warns against this:

[Do not] say to yourselves, “My own power and the might of my own hand have won this wealth for me.” Remember that it is Adonai your God who gives you the power to get wealth, in fulfillment of the covenant that [God] made on oath with your ancestors, as is still the case. (Deuteronomy 8:17-18)

The Rabbis’ warning (for all generations) is that this attitude can give rise to deeds and failures to act that lead to corruption, violence, and the erosion of society. For example: If my wealth is all mine and I am beholden to no one, I might choose to live my life walled off from all those whom I consider different from myself. If I believe I owe no thanks to God, Who deems it appropriate to share my wealth (since in reality I am the caretaker for the true owner: God), then I might decide to keep it all for myself and ignore the needs of others. If my life is Easy Street and I erroneously see that as my entitled due, failing to recognizes the advantages and opportunities with which I have been blessed, then the suffering of others may cause me no concern and evoke in me neither compassion nor response.  Angels and demons in close proximity.

When you look around today, does some of this look familiar to you? The Rabbis are keenly aware that attitudes translate into actions that either build or erode society.