Mark Twain (1835–1910) quipped, “Clothes make the man. Naked people have little or no influence on society.” He might well have been thinking about the High Priest who served in the Mishkan (wilderness Tabernacle), whose vestments were splendidly ornate and impressive. But had he lived to observe the influence of Mahatma Gandhi (1869–1948), I wonder what he might have said.

Aaron, the brother of Moses and the first High Priest of Israel, and Mohandas Karamchand Gandhi (known to his followers as Mahatma, “the great-souled one”) had much in common. 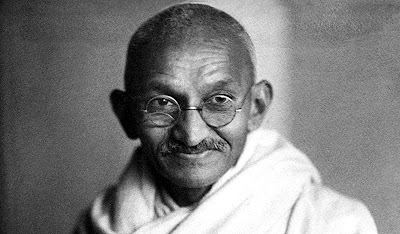 Both were instrumental in helping their people achieve independence. Aaron accompanied Moses every step of the way in confronting Pharaoh and helping the Israelites escape the clutches of Egypt. Gandhi was a leading activist in India’s struggle for independence from the colonial rule of Great Britain.

Aaron was revered as a peace-maker. Pirkei Avot 1:12 adjures us: “Be of the disciples of Aaron, loving peace and pursuing peace, loving human beings and drawing them close to Torah.” Mahatma Gandhi was venerated for his nonviolent philosophy of passive resistance.

Each man was an informal and unacknowledged prophet of his people. While Jewish tradition does not traditionally designate Aaron as a prophet, Rabbi Adin Steinsaltz has dubbed him “the People’s prophet.” Where Moses was aloof and imperious[1], Aaron was accessible and sensitive to the people’s needs. “Because he understood the people and sympathized with their shortcomings, he could guide them toward a goal that Moses had reached in a different way. Moses operated from the higher to the lower: he was the authority figure, giving orders and hardly explaining or educating. Aaron, on the other hand, functioned from the lower to the higher, trying to lead the people carefully, teaching and guiding them.”[2] Much the same can be said about Gandhi, who also operated from the lower to the higher, teaching his people and guiding them in the principles of nonviolent civil disobedience. While Hinduism does not, formally, have prophets,[3] Gandhi’s extraordinary life and lasting influence mark him as a prophet.

Both Aaron and Gandhi were fathers of four son. Aaron’s two elder sons, Nadab and Abihu, came to a tragic end when they offered “alien fire,” an unauthorized incense sacrifice. It was, essentially, a rebellion against their father, whose mission as High Priest was to adhere to the sacrificial service ordained by God. Gandhi’s eldest son, Harilal, also rebelled against his father. He sought a Western-style education in England (imagine Nadab asking Aaron if he could attend the university in Egypt), which led to his cutting ties with his family.

Aaron and Mahatma Gandhi differ in a number of ways, but Mark Twain’s humorous quip reminds us of one of the most visible differences: clothing.  Or was it really so different?

Parshat Tetzaveh speaks at length about the bigdei kehunah (priestly vestments) to be worn by Aaron and his sons when serving in the Mishkan (wilderness sanctuary). Torah tells us from the outset that the vestments are l’kavod u-l’tiferet / “for dignity and adornment” (Exodus 28:2). The priestly vestments—a uniform of sort—distinguished the priests from the people. Only they wore the special garments, which conferred immediate recognition as priests. Clothes matter.

Gandhi understood this. In 1921, he made a conscious and deliberate decision to trade in his traditional, ornate and tailored Gujarati attire for the dhoti (loincloth) and chaddar (shawl) made of khadi (homespun cotton) that was the “uniform” of poor people of India.

While the priests dressed in bigdei kehunah in response to God’s command to distinguish himself among the People Israel, Gandhi donned the dhoti to identify with his people.[4]

These are the vestments they are to make: a breast piece, an ephod, a robe a fringed tunic, a headdress, and a sash. They shall make those sacral vestments for our brother Aaron and his sons, for priestly service to Me; they, therefore, shall receive the gold, the blue, the purple, and crimson yarns, and the fine linen. (Exodus 28:4–5)

The Torah continues at length—more than 30 verses—detailing the elaborate design of each element and the precise materials used in their fabrication.

And for Aaron’s sons also you shall make tunics, and make sashes for them, and make turbans for them, l’kavod u-l’tiferet / for dignity and adornment… You shall make for them linen breeches to cover their nakedness; they shall extend from the hips to the thighs. They shall be worn by Aaron and his sons when they enter the Tent of Meeting or when they approach the altar to officiate in the sanctuary, so that they do not incur punishment and die. it shall be a law for all time for him and for his offspring to come. (Exodus 28:40, 42–43)

On the surface, it would seem that priestly vestments are the opposite of Gandhi’s style of dressing, but when we scratch the surface, similarities come to light.

Like Gandhi’s homespun cotton dhoti and chaddar, the vestments worn by all priests were made of a simple woven fabric—linen, the “common” fabric of the day.

A discussion in the Babylonian Talmud (tractate Zevachim) about these garments reveals the Rabbis’ attention to both the quality of l’kavod u-l’tiferet / for dignity and adornment (Exodus 28:40) and their recognition that the priestly “uniform,” like Gandhi’s “uniform,” was essentially peasant attire. How, then, were the vestments l’kavod u-l’tiferet / for dignity and adornment?

[18a] Our Rabbis taught [in a baraita]: If [the priestly vestments] trailed [on the floor], or did not reach [the floor], or were threadbare, and [the priest] officiated [in them], his service is valid. But if he put on two pairs of breeches, two sashes, or if he was lacking a vestment, or if he wore one too many, or if he had a plaster on a wound in his flesh, or if [his vestments] were [18b] besmeared or torn, and he officiated, his service is invalid. Rav Yehudah said in Shmuel’s name, “Trailing [vestments] are fit; [vestments that] do not reach [the floor] are unfit.” But was it taught [in the baraita] that if they do not reach [the ground] they are fit? Rami b. Chama said, “There is no difficulty: Here [the teaching of Shmuel] means where he hitches them up by the sash; here [the baraita], where from the very outset they are not long enough. Rav said, “Both [garments] are invalid.” (BT Zevachim 18)

Let us examine the passage and then consider how we might understand it.

The Talmud cites a baraita (Mishnaic-era oral teaching) that delineates three qualities of priestly attire that do not disqualify the priest who wears it: if the priest’s clothing is too large and drags on the ground, or is too small and doesn’t quite reach the ground, or is worn out and threadbare, the sanctuary service done in the garments is nonetheless acceptable. If, however, the priest wears two items where only one is required, or is missing one of the four specified garments, or adds something to the attire not commanded by God, or comes to the sanctuary in garments that are soiled or torn, then the service or sacrifice he does is unfit.  The baraita leaves room for the possibility that a priest does not have an outfit that fits perfectly, or the money to replace one that is worn out, but expects him to keep it clean and repaired and to wear the required items—no more and no less—that Torah prescribes.

Rav Yehudah brings a teaching from Shmuel that contradicts the baraita. Shmuel agrees that a garment that is too long does not invalidate the priest’s service, but opines that garments that are too short are not acceptable. Shmuel is echoing Torah’s concern for modesty: excessive cover is fine, but insufficient cover is not.

The Gemara points out the contradiction between the baraita and Shmuel concerning priestly garments that are too short to reach the ground. Rami b. Chama seeks to resolve the contradiction by telling us that Shmuel envisioned a priest who had hitched up his excessively long garment with a sash in such a way that it was then too short—this Shmuel declared to be unacceptable. The baraita, according to Rami b. Chama, concerns garments that were too short from the get-go. In other words, if the garments are too short because that’s all the priest has to wear, they do not invalidate his service; if they are too short because he sloppily hoisted them with his sash, but failed to be careful to cover his body, his service is not acceptable.

Finally, Rav (whose decision is considered final in this matter) says that both “too short” garments are unacceptable—meaning garments that were too short in absolute size, or hiked up too far.

Given the priority on modesty, this decision is not altogether surprising. What is interesting to note is that dirty and torn garments are unquestionably unacceptable—dignity requires one to launder and repair them—but in cases where the priest’s sash can alter the drape of the garment to the proper length, this is perfectly acceptable.

The Rabbis saw the priests’ garments as “every man’s clothing” in substance, but how the priest wore it elevated it to being l’kavod u-l’tiferet / for dignity and adornment (Exodus 28:40). So, too, Gandhi’s dhoti and chaddar: On Gandhi, pleasant clothing conveyed dignity and moral vision. The old adage, “the clothes don’t make the man,” isn’t true. The man makes the clothes.