The images of the pain and suffering in Japan caused by the earthquake and tsunami are devastating to see. How are we to respond?

The Jerusalem Talmud records a debate between Akiba and Ben Azzai, second century sages and contemporaries.

While there are many ways to interpret the distinction Akiba and Ben Azzai make here, I want to offer one that speaks to the question of how we respond to suffering and devastation halfway around the globe. Let’s begin with Ben Azzai, who tells us that Jewish ethics derive from an appreciation of our common humanity, our connection to all people on earth. R. Akiba seems say that this is more than any one human being can truly feel or act upon; a more realistic and modest goal is to feel kinship with those around us – our “neighbors” – and to act on that connection. If each of us responds to those in our “neighborhood,” and others do the same, our neighborhoods are sufficiently overlapping that, at least in theory, everyone’s needs can be met.

Today, R. Akiba and Ben Azzai meet on the plane of modern technology, where our “neighborhood” is global. Thanks to the Internet, cameras convey video at lightning speed, and together with 24/7 newsfeed, we are instantly and continually keenly aware of what happens on the other side of Planet Earth. It is all piped into our living rooms, iPads, and droid phones.

On the eighth day Moses called Aaron and his sons, and the elders of Israel. He said to Aaron: “Take a calf of the herd for a purification offering and a ram for a burnt offering, without blemish, and bring them before the Lord. And speak to the Israelites, saying: Take a he-goat for purification offerings; a calf and a lamb, yearlings without blemish, for burnt offering; and an ox and a ram for an offering of well-being to sacrifice before the Lord; and a grain offering with oil mixed in. For today the Lord will appear to you.

They brought to the front of the Tent of Meeting the things that Moses had commanded, and the whole community came forward and stood before the Lord. (Leviticus 9:1-5)

How is it possible that the entire community fit in the small space in front of the Tent of Meeting? Is this merely a fanciful exaggeration. Or is Torah teaching us something about the community?

Once there was a town where it was the custom that when a mayor died, the new mayor would place a large barrel outside the front door of his home. Everyone in town would bring a bottle of wine sometime during the night to contribute to the barrel. The following day, the town would gather to celebrate the installation of their new mayor and together drink the wine in the barrel.

It happened that the mayor died. The new mayor set out a barrel as custom dictated. The people of the town thought, “Why should I bring a bottle of wine? If I pour one bottle of water into such a big barrel, who would ever know?” Throughout the night, people came in the dark and emptied bottles of water into the barrel.

In the morning, the mayor dipped a cup into the barrel to initiate the festivities. He knew immediately, even before sipping it, that the barrel was filled with water. Nonetheless, he took a sip, then another sip, and announced, “I can tell that someone in town contributed a bottle of water rather than wine. Moreover, I knew who that person is. Rather than announce aloud who it is, I want to give that person an opportunity to correct the deed. Therefore, we will postpone our celebration until tomorrow. Tonight I will place another barrel outside my house so that person can bring a bottle of wine and tomorrow we shall all celebrate together.”

That night, each and every person in town came in the dark and emptied a bottle of wine into the barrel. They came all night long under the cover of darkness, ashamed that they had expected others to contribute but had failed themselves to make a donation. Only after pouring a bottle of wine into the barrel did each person feel that he or she had made a proper contribution.

The next day the town held a festival more joyous than ever before.

We each have a contribution to make that truly matters. No one of us has to fill the barrel, but each of us has a bottle of wine to bring.

Last week we read Parshat Tzav. It’s curious how this parashah, which describes the initiation of worship in the Tabernacle, begins with Moses (The Lord spoke to Moses saying… -- Leviticus 6:1), then enlarges the circle to include the priests (This is the offering that Aaron and his sons shall offer to the Lord on the occasion of his anointment… -- Leviticus 6:12), then enlarges the circle further to encompass the Israelites (Speak to the Israelite people thus… -- Leviticus 7:22), and ends on this note: …and assemble the whole community at the entrance to the Tent of Meeting (Leviticus 8:3).

Torah teaches us to begin locally and grow outward in our awareness, concern, and compassion, until we encompass the “whole community.”

Parshat Shemini, which we read this week, picks up where Tzav leaves off (as quoted above):

They brought to the front of the Tent of Meeting the things that Moses had commanded, and the whole community came forward and stood before the Lord. (Leviticus 9:1-5)

Shemini (which means “eighth”) tells us about the eighth day – the day after the seven-day inauguration of the Tabernacle.

What’s the big deal about the eighth day? The seven-day initiation celebration mirrors the creation of the world. God created the universe in seven days; the Tabernacle, whose rites will keep the world spinning, is initiated in a seven-day ceremony. The eighth day is the day of completion, perfection, beginning anew at a higher level. (So, too, with brit milah: a child lives for seven days, reproducing the Creation in his own short life, and then on the eighth day he is completed, perfected through circumcision, and begins his covenantal life.) The Talmud links Creation and the Tabernacle. Megillah 10b tells us that the day the Tabernacle was erected was as joyous for God as the day when heaven and earth were created.

The eighth day is the new beginning when we assemble together and all of us stand before the Lord. It is the ideal. Perhaps we cannot feel toward everyone as we feel toward those in our local neighborhood, but we can respond nonetheless. R. Akiba’s and Ben Azzai’s principle have a meeting ground in our actions.

Shortly after the disaster in Japan, many organizations in the Jewish community opened boxes to accept donations. The Jewish Joint Distribution Committee (http://www.jdc.org/) is accepting donations. Within days, ZAKA was on the ground in Japan doing what it does so well (http://www.zaka.us/). The Associate in Baltimore responded quickly (http://www.associated.org). We live in a global neighborhood. Let’s bring wine to the barrel. 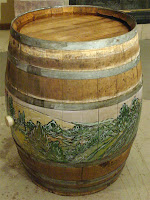