SPECIAL NOTE: If you are looking for avenues for making donations to help the victims of the earthquake and tsunami
in Japan, please consider:
The Jewish Joint Distribution Committee
ZAKA
The Associate of Baltimore
May the victims in Japan soon know comfort and consolation.

When my children were young, they had clothing reserved for messy activities like painting, working with clay, and playing in the dirt. My husband and I reserved t-shirts and shorts for indoor house painting – the shirts “artistically” reflect every paint color we’ve ever used. We wouldn’t have considered wearing good clothes for dirty tasks.

There was messy work to do in the Mishkan (Wilderness Tabernacle) and later in the Temple in Jerusalem. Among the messy daily chores was cleaning the ashes off the altar pyre, where many sacrifices were burned to ashes each day. You might think that the priests would reserve work clothes for this dirty job, but that’s not the case. Torah tells us that they were especially instructed by God to wear their priestly linen raiment:

The Lord spoke to Moses, saying: Command Aaron and his sons thus: This is the ritual of the burnt offering: The burnt offering itself shall remain where it is burned upon the altar all night until morning, while the fire on the altar is kept going on it. The priest shall dress in linen raiment, with linen breeches next to his body; and he shall take up the ashes to which the fire has reduced the burnt offering on the altar and place them beside the altar. He shall then take off his vestments, and put on other clothing, and carry the ashes outside the camp to a clean place. (Leviticus 6:1-4)

The priest did not participate only in the exalted and awe-inspiring elements of the sacrificial cult. They got their hands dirty, too. When the Second Temple stood, the mitzvah of removing the ashes – called Terumat HaDeshen – was originally undertaken by whichever priest arose early in the morning. In time, however, there evolved a daily footrace up the ramp to the altar for the privilege of the dirty chore of removing the ashes. Even the inglorious tasks that contributed to the holy work of the Temple were considered an honor and a privilege. I think of that when I have to do something I don’t want to do. I ask myself: Is there a holy component to this? Who will benefit from what I should be doing? That helps me find motivation not only to get the task done, but also to see that the potential for holiness is inherent in every act. Much of Jewish living – and here I mean the Jewish attitude and values for living, not the particular obligations and rituals of daily life – is to sanctify the mundane, to find in everything a connection to the bigger picture and to God. 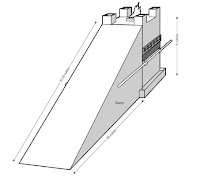 It is also possible to go too far and end up in a dangerous place. The human psyche is complex and we often have a tough time keeping things in balance. Mundane and even banal chores can indeed be, or lead to, acts of holiness. But when our thinking becomes skewed, rather than approach tasks with humility, we risk poisoning the very sanctity of the act. This happens when we transform what should be a sacred act into a means for boosting our own status (recall the joke whose punch line is, “Look who thinks he’s nothing!”).

The Talmud illustrates this with a disturbing and graphic story that presumably occurred during the Second Temple period. The footraces up the ramp had become increasingly competitive. The young priests who participated in them lost sight of the fact that removing the ashes was a mitzvah, a sacred task. They were fixated on winning. For them it became an opportunity for self-aggrandizement. One day, the race erupted into violence: one young priest thrust a knife into his competitor to prevent him from reaching the altar first. Here’s the grisly account from Yoma 23a:

It once happened that two [of the priests] were neck and neck as they ran and ascended the ramp [to the altar]. One of them came within four cubits [of the top of the ramp]. His colleague took a knife and drove it into his heart.

R. Tzaddok stood on the steps of the Hall and cried, “Our Brothers, O House of Israel, listen! Behold it says: If a corpse will be found on the land… your elders and judges shall go out… (Deuteronomy 21:1-2) [to perform the ritual of the eglah arufah to effect atonement]. As for us: upon whom [rests the responsibility] to bring an eglah arufah? The city? [The priests who guard] the courtyard? All the people burst out crying.

The father of the boy came and found him writhing [but not yet dead]. He said: “Behold he is your atonement. My son is still writhing so the knife did not become ritually unclean.”

This teaches you that they regarded the ritual purity of the vessels more seriously than murder. Thus [Scripture] states: Manasseh also shed much innocent blood, until he filled Jerusalem from end to end… (2 Kings 21:16).

This account is unlikely to be historical. It is most likely a constructed story – based on a reality that the footraces had become excessively competitive – that provides the Rabbis the opportunity to teach us about misplaced priorities.

What happens is clear enough: a squadron of young priests races up the altar ramp toward the pile of ashes. The one who arrives first wins the privilege of Terumat HaDeshen for that day. So intense is the competition, that one young man thrusts a knife into the chest of another to prevent him from winning the competition.

What are we to make of the bizarre responses to this act of horrific violence in the name of a sacred task?

R. Tzaddok, viewing the race from below, fails to show concern for the life of the young man who has been knifed. Instead, he expresses concerned that his corpse will convey tum’ah (ritual impurity) to the Temple area, and asks how atonement should be affected in this unusual circumstance. He cites a completely inappropriate verse in Deuteronomy that explains how atonement is affected in a case where a corpse is found in a field outside town and it is not known who the murderer is. Torah tells us that the elders gather to perform a rite of atonement through which they declare they are not responsible for the death. R. Tzaddok is asking: who should perform that ritual? In this case, the murderer is known and there is a multitude of witnesses. Citing this verse from Deuteronomy suggests that in addition to allowing the inappropriate race to take place each day, the priests in charge are unwilling to take responsibility for the violence that ensues.

R. Tzaddok’s tragically misplaced priorities are shared by the people present that morning. Please don’t miss the cruel irony: the people are crying not because innocent has been shed in a vulgar perversion of the sacred rituals of the Temple, but because they’re worried about tum’ah (ritual impurity) and ritual atonement.

This brings us to the father’s enigmatic statement. It becomes apparent that he is the only one who has approached the young man’s body to see if he is, in fact, dead! He sees that his son is still alive. Responding to the concern about tum’ah (ritual impurity), he assures those present that so long as the boy remains alive (writhing in pain on the ground!) the knife in his chest is not yet tamei (ritually impure) and therefore does not convey tum’ah. The father is delivering a chilling and (from the perspective of the Rabbis well-placed) condemnation of priorities so skewed that they are an utter perversion of Jewish values.

The Rabbis echo the father’s condemnation with these words, “This teaches you that they regarded the ritual purity of the vessels more seriously than murder.” They also add a verse from Second Kings concerning King Manasseh of Judah who ruled for more than four decades in the seventh century B.C.E. Manasseh reversed the religious reforms of his father Hezekiah, brought idol worship into the Temple, consigned his son to fire, and practiced necromancy. He also killed a great many Jews to consolidate his power. The Rabbis quote only the first half of 2 Kings 12:16. It’s always worthwhile to check out the entire verse, as well as the context, to get a fuller sense of what the Sages have in mind. Here’s the whole verse:

Manasseh also shed much innocent blood, until he filled Jerusalem from end to end – besides the sin he committed in causing Judah to do what was displeasing to the Lord.

Manasseh, as the leader, led others astray. The Rabbis warn us that those in authority have a sacred responsibility not only to do the right thing, but also to model that for others.

Menasseh had systematically destroyed all the Torah scrolls and alienated the nation so thoroughly from the Torah, that the people were completely unfamiliar with its contents.

King Menasseh is used in our story – in Yoma 23a – as the poster-boy for people in possession of power and authority who utterly pervert the values of Torah and lead others to do the same, to such an extent that they don’t even know what Torah is about. What a fitting verse to quote as the epilogue to this story!

The mitzvah of Terumat HaDeshen (clearing away the ashes) teaches that even banal tasks can be sacred – indeed everything in our universe and our lives has the potential for holiness if approached with the right attitude. At the same time, it is altogether too easy for that attitude to be drowned by human tendencies to compete and achieve status, in which case not only is the holiness lost, but sacred rituals become unholy perversions of Torah.