The sting of criticism / Devarim


Imagine that you are attending a lovely dinner party in celebration of the 40th anniversary and retirement of the CEO of the company where you work. The CEO started the company, nurtured it, and grew it into an admirable success. Following dinner, the retiring CEO strides to the podium, leans into the microphone, and says, “For 40 years we have worked side-by-side to build this company. I have poured my heart and soul into it, but you have not always supported my efforts. In fact, you have failed me on many occasions…” and with that beginning, he enumerates the ways his employees have disappointed him over the years. Yes, the business grew and succeeded, but the road was twisted and rocky, and it is the stones and hairpin turns that the CEO now recalls.

Sefer Devarim (the Book of Deuteronomy) presents itself as a compilation of Moses’ final addresses to the Israelites. He will soon retire from life, and the Israelites will enter the Land without him. Moses begins by recalling Sinai and God’s promise that they would inherit the Land of the their ancestors. But then Moses says abruptly,

… “I cannot bear the burden of you by myself. The Lord your God has multiplied you until you are today as numerous as the stars in the sky… How can I bear unaided the trouble of you, and the burden, and bickering! (Deuteronomy 1:9-12)

A bit later, Moses recounts the episode of the spies and reminds the assembled nation,

Yet you refused to go up, and flouted the command of the Lord your God. You sulked in your tents and said, “It is because the Lord hates us that He brought us out of the land of Egypt, to hand us over to the Amorite to wipe us out.” (Deuteronomy 1:26-27)

Why does Moses begin on such a critical and demoralizing note? We might say that he was scrupulously following Torah’s instruction, Do not hate your fellow in your heart. You should surely rebuke your neighbor and not bear sin because of him (Leviticus 19:17). Our Sages understood this verse as a mandate to rebuke those who have sinned. But of course that rebuke happened -- long before when the events occurred.

After telling us of our duty to rebuke, in the next breath the Rabbis tell us that there is a proper way to do this. Here are the principles:
1.     Do it gently and quietly.
2.     Do it only in private and avoid embarrassing the recipient.
3.     Rebuke only with the intent to help the recipient to do better.
These are difficult conditions to fulfill. Rebuke creates a most uncomfortable situation for both the one delivering rebuke, and the one receiving it. No one likes to be criticized and most of us don’t like to criticize another to his or her face.

When the Sages discuss how and when to rebuke another person, we find a trilogy of opinions that sound remarkably contemporary:

R. Eleazar b. Azariah said, “I wonder if there is anyone in this generation who knows how to reprove!”

R. Yochanan ben Nuri said, “I call heaven and earth to witness for myself that Akiba was often rebuked by me, for I used to complain against him before Rabban Gamliel, and he showered love upon me all the more, fulfilling what has been said, Do not rebuke a scoffer, for he will hate you; reprove a wise person and he will love you (Proverbs 9:8).”

Rabbi Tarfon and Rabbi Eleazar b. Azariah tell us that delivering rebuke is essentially pointless because people reject it, and no one is really knows how to deliver it anyway. R. Yochanan b. Nuri, in providing the exceptional case, reinforces his colleagues’ argument: there is none like Akiba, just as there was none like Moses. Therefore, rebuke is a practice of the past.

Most of us think we’re not critical people, but the reality is that knowingly or unknowingly, we deliver criticism and rebuke day in and day out.

The Rabbis give us an excellent set of overarching principles, but we need to put flesh on these bones to deal with the nitty-gritty of life. How should we frame our message? What words should we use and which should we avoid? How can we ensure that we are constructive and not insulting? In truth, this is something we should all study diligently because even when we don’t mean to be critical, often our words are heard as criticism, and they wound. Here are a few helpful resources:

Let’s assume for the moment that the mother, boss, and teacher mentioned earlier did have something negative in the backs of their minds. What might they have said?

Proverbs 18:21 reminds us, Death and life are in the power of the tongue, and those who love her [the tongue] shall eat its fruit. 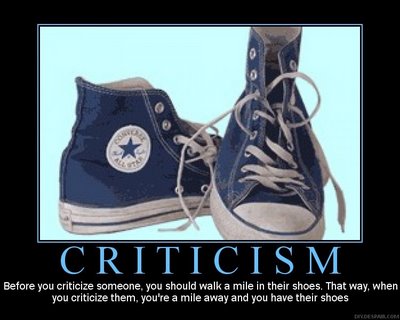 Posted by Rabbi Amy Scheinerman at 12:30 AM