Many years ago, we gathered several families together for a Passover seder at our home. The oldest children were nearing three. My husband hid the afikomen in the light fixture hanging above the table, an open, wrought-iron piece we picked up for $3 at a yard sale that looked a lot like this, but was without all the rust: 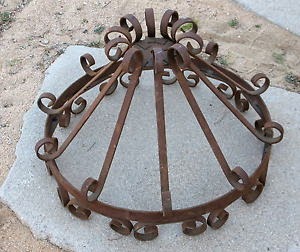 Imagine a half sheet of matzah wrapped in a napkin sitting on that fixture. Not too hard to find hanging directly over the dinner table, is it? Yet the kids never found it. It never occurred to them to look above eye level. How often is something right before our eyes, yet we completely miss it?

An example is found in this week’s parashah, Naso. Nestled between instructions to the Levitical clans concerning the porterage of the Mishkan (Tabernacle) and the well-known and oft-commented-upon passages about the sotah (suspected adulteress), Nazarite, priestly benediction, and offerings brought to the Tabernacle by each tribe, are three verses that open like a door to disclose a world of values about Torah’s view of human nature, behavior, and repentance. Here are the verses:

The Lord spoke to Moses, saying: Speak to the Israelites: When a man or woman commits any wrong toward another person, thus breaking faith with the Lord, and that person realizes his guilt, he shall confess the wrong that he has done. He shall make restitution in the principle amount and add one-fifth to it, giving it to him whom he has wronged.(Numbers 5:5-7)

As I said, it’s easy to gloss over this passage without taking in just how extraordinary it is. The “wrong committed” is generally understood to be theft. On the basis of numerous rabbinic commentaries through the ages, the commentary in Etz Hayim understands the passage this way: “The crime consists of defrauding another person and then committing sacrilege against God by denying it in a false oath.” This certainly isn’t all spelled out in the text and, indeed, the underlying messages of the passage take on greater depth and resonance if we understand “commits any wrong toward another person” in a more general way.

What lies beneath the passage? What’s packed into these three verses?

First, Torah understands that things go wrong between people—sometimes we hurt and wrong one another. But the wrongs can be righted and the hurt can be repaired. God does not expect of us perfection and we are not forever ruined or tainted by our mistakes. Just as we are not defined by our mistakes, nor should we define others by theirs.

Second, although the precise nature of the the “wrong” Torah has in mind is not objectively clear, what is clear is that Torah unequivocally asserts that one who wrongs another person wrongs God, as well. It is not just that God insists upon a certain code of moral behavior. God is hurt when any person is hurt. God is cheated when any person is cheated. God is wronged when any person is wrong. Our actions have ramifications beyond the immediate; we send ripples out into the universe, indeed into the cosmos. We cannot console ourselves by saying, “What I did wasn’t a big deal, no one will know or be hurt,” because on some level, that is never the case. If we can learn to take ourselves—our significance, our choices, and our actions—as seriously as God does, we can become much better people.

Third, the phrase וְאָשְׁמָה הַנֶּפֶשׁ הַהִוא (“[when] that person realizes his guilt”) affirms the innate goodness and conscience Torah ascribes to human beings. No original sin here. Certainly every society sets boundaries on human behavior by establishing laws and imposing consequences. But Torah knows that we are endowed with moral discernment—a quality only our species enjoys—and therefore fully capable of policing and judging our own behavior. Torah does not say, “If that person is caught wronging another person…” but rather “[when] that person realizes his guilt.” This in itself is a glorious affirmation of the human being as moral agent. Those who lived through the Nixon era know that Watergate tainted America culture: a cynical political attitude cultivated by Watergate was not condemnation of the egregious disregard of the Constitution displayed by President Nixon and his minions, nor revulsion at the criminal actions he approved for political gain, but rather expressed most succinctly by G. Gordon Liddy, mastermind of the Watergate break-in and burglary, who to this day maintains that his only crime was getting caught. Even after being released from prison in 1977, Liddy termed his jail term “an occupational hazard” and explained that, ”in combat, sometimes you get captured by the enemy.” Torah knows we are capable of moral self-reflection, and that the attitude expressed by Liddy is far beneath those created in the image of the Divine.

Fourth, Torah teaches that confession is valuable. The Hebrew term הִתְוַדּוּ (hit-va-du) is a reflexive verb, suggesting that the first, or primary purpose of confession is to admit to ourselves what we have done. Such acknowledgement, in the face of our human proclivity to deny guilt, is often no small feat. Taking responsibility for our actions is crucially important in the process of teshuvah (repentance). Without it, there can be no change and improvement, nor healing on the part of the one we have wronged.

Fifth, Torah demands restitution. What we set asunder we need to set aright. Not everything is reparable, but very many wrongs are, and teshuvah is not complete until we have done what we can to undo the wrong.

In short, the passage tells us:
•    Know that many wrongs can be repaired, and making a mistake does not forever taint you.
•    Learn to recognize the ripples you send out through the universe and your effect even on God.
•    Use the gift of your moral discernment to take responsibility and confess the truth of what you have done to yourself.
•    Rectify the wrong—set things right.

R. Elimelekh of Lizhensk (1717-1787), a disciple of Dov Baer, the Maggid of Mezeritch, explained the verse that opens the Book of Numbers (of which Parshat Naso is the second Torah portion) in a novel and surprising way. To him, this seemingly bland verse is about the transformation that occurs in our lives through repentance and renewal. Here is the first verse of the Book of Numbers:

With this sentence the Torah is teaching correct conduct. The words the desert of Sinai are a reminder that the Torah was given on Mount Sinai in order to teach you to be extremely humble and self-effacing. Remember that God rejected all the high mountains and chose Mount Sinai, which was the lowest of them all. [Here, R. Elimelekh refers to Midrash Tehillim 69:8 which says that God chose Sinai as the place to reveal Torah to Israel because the other mountains bragged and vied for the honor, while Sinai remained silent and humble.]

But take care that this submissiveness not lead you into depression, for that is a great obstacle to God’s service. The Torah teaches that you should always be joyful. The Shekhinah is not present amid sadness. The words in the Tent of Meeting (b’ohel mo’ed) imply that you should enter the tent of joy, for the word for meeting (mo’ed) is also the word for festival.

On the first day of the second month (chodesh, “renewal”). But should you say, how can I rejoice when I have sinned so extensively? The Torah teaches that you should nevertheless engage in repentance with joy. Encourage yourself by saying, “I am reborn this very day and I will never return to my foolishness.” Renewal (chiddush) is about becoming a new person, and this is alluded to in the words the first day of the second month (chodesh). Indeed this is the second new start: the first was when you were born, and the second is when you repent and are forgiven.

R. Elimelekh tells us that going throughout the process of teshuvah is not one of shame and misery: done right, it is one of joy. We emerge renewed and reinvigorated.

This is a tough concept to wrap our minds around in a society, which records everything and forgets nothing. We either aim for an impossible perfection, or complete denial of our mistakes and wrongdoings because they tarnish what we imagine to be our perfect sheen. Vineet Nayar, writing in the Harvard Business Review, encapsulates our view of making mistakes:

All through school, a mistake indicates the prospect of lower grades. Good students don’t make mistakes. At home, mistakes lead to admonishments. Good children follow the rules. At work, mistakes have serious repercussions. Good workers get it right the first time.[1]

I would argue that the same attitude holds true for our approach to specifically behavioral and ethical wrongs. Paraphrasing Nayar: “Good people follow the rules of good behavior all the time. Good people get it right every time.” Nayar, speaking in the realm of business, points out that there is much to be learned by making mistakes: people grow in their experience. He writes, “if you aren’t making mistakes, you’re not learning—or, at least, you’re not learning enough.” While we would not encourage or countenance people hurting and wronging one another in order to learn, it is certainly the case that by going through the process of teshuvah that Torah describes so beautifully we grow into better human beings—better versions of ourselves.