Calling it a major breakthrough that will significantly expedite and streamline its daily operations, Wall Street financial firm Goldman Sachs revealed Thursday it has developed a new high-speed algorithm that is capable of performing more than 10,000 ethical violations per second. “With this new automated program, we’ll be able to systematically deceive investors, engage in conflicts of interest, and execute thousands of other blatantly unethical dealings in the time it takes to press a button,” said John Waldron, co-head of Goldman Sachs’ investment banking division, who added that the high-frequency impropriety system will be able to break more rules in a minute than an entire floor of morally suspect securities traders, financial analysts, and portfolio managers could over the course of a week. “In the past, if one of our brokers wanted to exploit a questionably legal regulatory loophole or breach the covenant of good faith with an investment client, that would require hours of manually contravening the basic principles of professional integrity. But this innovative system will allow millions of such transgressions to go through every single day. Going forward, I expect this revolutionary program to be the cornerstone of our business.” Upon learning of the advanced new unethical algorithm, investors initiated a buying frenzy on Goldman Sachs stock, sending share prices surging more than 30 percent to $245.46.

This newsflash is from The Onion. It rings uncomfortably true, doesn’t it? The idea of using technology to purposefully circumvent the law and engage in unethical business dealings doesn’t surprise any of us. Just two Goldman traders, Josh Birnbaum and Michael Swenson, made a nearly unimaginable $4 billion in what was essentially a scheme to bet against high-risk second-mortgages. Ultimately thousands upon thousands of people lost their homes and retirement funds. The Washington Post reported that Goldman Sachs received  $10 billion in TARP funds from the U.S. Treasury in October 2008. The Wall Street Journal reported the following July that these funds were used to pay 953 employees bonuses of at least $1 million each. Since 2008, when the subprime mortgage crisis that led to a worldwide financial meltdown—in which Goldman Sachs played a leading an appalling role—only one employee has seen the inside of a prison: a computer programmer.

The Onion’s parody hits home precisely because we envision that those on Wall Street responsible for the subprime mortgage crisis, not to mention many other unethical and illegal dealings over the years, are devoid of ethics and that they would consider a computer program that facilitates cheating efficiently and at the speed of light to be a marvel, not an evil.

From high tech and unethical practices, we turn to a much earlier (and some would claim, primitive) technology for promoting personal and communal moral responsibility, and making mid-course corrections when an individual or community errs.

This week we begin the Book of Leviticus with the first parashah, Vayikra. Leviticus is famously about sacrifices. It reads much like a pocket manual on sacrifices for the kohanim (priests), specifying the types of sacrifices and offerings brought to the Mishkan (Tabernacle) and precisely when and how they were to be offered. For this reason Leviticus is also known, aptly enough, as Torat Kohanim (“instruction for the priests”). Parshat Vayikra delineates five major categories of sacrifices offered in the Wilderness Mishkan, and later in the Temple in Jerusalem:
1.    The Olah (burnt offering) is a gift to God brought either out of sense of love for God, or a sense of guilt. Its name means “go up” or “rise” because the smoke of the offering burned wholly on the altar rises to heaven, and because giving this gift to God elevates one’s spirit.
2.    The Minchah (grain offering) was made of semolina, olive oil, and frankincense mixed together and cooked in a pan or oven. A fistful of the dough was burned on the altar; the remainder was eaten by the priests.
3.    The Zevach Shelamim (peace offering) is made by an individual to express gratitude and a sense of wholeness.
4.    The Chatat (sin offering) was brought, as Torah expresses it: when a person unwittingly incurs guilt in regard to any of the Lord’s commandments about things not to be done, and does one of them (Leviticus 4:2).
5.    The Asham (guilt offering) is a reparation offering for sins of omission (when one fails to do what one should) or when one realizes after the fact that s/he did something in violation of a commandment.

Israel’s ancient sacrificial cult is not everyone’s favorite biblical subject. Many people, not only vegetarians, express discomfort with the whole notion of animal sacrifice. This is nothing new. The Rambam (Moses Maimonides, 1135–1204) considered animal sacrifice to be merely a step in Israel’s spiritual development, God’s way of weaning our ancestors off idolatry and onto worshipping God. Isaac Abravanel (1437–1508) claimed that God did not initially intend for Israel to offer animal sacrifices, but after the incident of the Golden Calf, God recognized the Israelites’ need for concrete ritual through which to interact with God; an abstract notion of divinity would not work for them. Rabbi Abraham Isaac Kook (1865–1935), himself a vegetarian, believed that when the Third Temple is built, only the Minchah (grain offering) will be brought to the altar, in fulfillment of Isaiah 11:9, לֹא-יָרֵעוּ וְלֹא-יַשְׁחִיתוּ, בְּכָל-הַר קָדְשִׁי “None shall hurt or destroy in all My holy mountain.”

And while I am not one who longs for a restoration of the sacrificial cult, I can appreciate the value of a concrete and tangible ritual—one which involves all the physical senses: seeing, hearing, smelling, touching, and sometimes tasting—to daily express the importance of following a path of honesty and integrity, and to provide a means of course-correction when one’s life does not follow that path. If the financial wizards and gurus of Wall Street, the thousands of traders, computer programmers, and executives, lived in a world in which people individually and communally admitted wrongdoing and took public, visible steps to ameliorate the effects of their behavior and atone for it, perhaps the atmosphere on Wall Street would be different. Perhaps the sense that as long as you’re not caught what you do is acceptable, would turn to ashes like the offerings on the altar, and perhaps at least some souls would turn away from their greed and sense of immunity from the law, which sadly our society reinforces by the failing to prosecute the guilty.

Parshat Vayikra is named for its first word: ויקרא (vayikra—“he called”). While vayikra appears hundreds of times in the Torah, in this particular instance it is written with a small aleph: 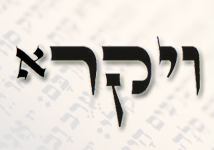 Why is the aleph diminished? Before we address the diminutive aleph, let us note that Divrei ha-Yamim (Book of Chronicles) begins, “Adam, Seth, Enosh…” and here the letter aleph, the first in the name Adam, is larger than the other letters:
אָדָם שֵׁת אֱנוֹשׁ

There is a hasidic explanation of both the diminutive aleph and the large aleph: Adam was created directly by God and considered himself the apex of Creation. His conceit led to his expulsion from Eden. In contrast, Moses did not internalize his greatness; he remained humble. Torah tells us וְהָאִישׁ מֹשֶׁה, עָנָו מְאֹד--מִכֹּל, הָאָדָם, אֲשֶׁר, עַל-פְּנֵי הָאֲדָמָה “Now Moses was a very humble man, more so than any other man on earth” (Numbers 12:3). R. Jacob b. Asher (~1269–~1343), the Ba’al ha-Turim, explains the diminutive aleph another way. He tells us that God ordered Moses to write ויקרא (“called”), but Moses was so exceedingly humble that he wanted to use the word ויקר that Torah uses in connection with Bilaam, implying that Bilaam was not specifically called, but rather “chanced upon” by God. God insisted that Moses write out ויקרא with the aleph, which is also the first letter of אני (ani, “me”). Moses then wrote the aleph smaller than the other letters, in fulfillment of God’s will, yet reflecting his humility.

The sacrificial altar is long gone, and with it that particular, tangible means to promote personal responsibility, repentance, and atonement. We need to redouble our efforts to promote humility.