Parshat Tzav paints a vivid picture: Before the entire community of Israel, Moses brings forward Aaron and his sons, washes them with water and dresses them in the raiment of their station. For Aaron, the High Priest, that means a tunic, sash, robe, ephod, breast piece with Urim and Tummim, headdress, and diadem. At the right is a depiction of what the High Priest’s garb it thought to have looked like. Next Moses took specially prepared olive oil and anointed the Tabernacle, the alter and the utensils that would be used to make sacrifices, the laver in which the priests would wash their hands and feet before making sacrifices, and finally Aaron, himself. In this way Aaron and the Tabernacle were consecrated: they were declared sacred to God and dedicated to the service of God. 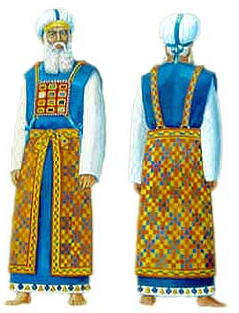 Reading this description brought back a memory from long ago that may strike you as utterly dissonant in the context of the momentous moment and solemn ceremony Torah describes.  In elementary school, one of my most cherished dreams was to secure a spot on the school safety patrol. Do you recall safeties? In K–6 school I attended, safeties were sixth graders who directed students in the hallways and at street corners near the school at dismissal time. Safeties got to wear white web belts with silver badges affixed. To me, these were the equivalent of the garb of a high priest. My initial application to be a safety was turned down because I was too short. When I appealed my rejection, the teacher in charge agreed to give me a chance. He handed me a brand-new, shiny, plastic orange belt—a new version of the old, white standard. I felt my heart sink. I had imagined wearing the traditional white web belt; that’s what real safeties wear.  “Are there any more white belts?” I asked. The teacher looked at me quizzically and gently responded, “Please give some thought to why you want to be a safety.” Given how much I respected this teacher, I did. And it didn’t take me long to realize that my ambition to be a safety was all about wearing the belt and the status I imagined it afforded, not the importance of the job. For years I had listened to safeties yell and order other kids around and, while I had no interest in yelling at anyone, the idea of having a post, along with the concomitant authority, was mighty appealing. 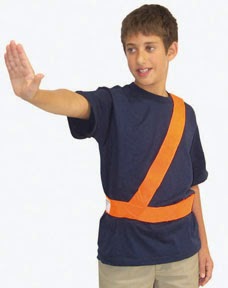 One can easily imagine Aaron becoming lost in the pomp and circumstance, ceremony and status, of his position. Does it go to his head? Does he lose sight of the fact that he is there to serve God and Israel and become enthralled by his power and authority? Aaron has lived much of his life in the shadow of his younger brother, Moses. It is Moses whom God appoints to confront Pharaoh. Aaron goes along as his assistant. Moses gets the white belt; Aaron gets the orange belt. He’s not even mentioned in the account of the Reed Sea (Exodus 14-15). When the Israelites fight the Amalekites, Aaron plays a supporting role—literally: he and Hur hold up Moses’ outstretch arms to ensure that the Israelites will be victorious in battle (Exodus 17:8-13). When Moses ascends Mount Sinai,  Aaron finds himself, at long last, “in charge.” But what happens? He immediately succumbs to the demands of the people to build them a golden calf to worship. He is wildly popular with the people, but the outcome is what tradition has always branded as the worst case of idolatry in Israel’s history. Now, Aaron stands posed to take on the highest religious role in the nation, one that will be passed from generation to generation in perpetuity. He, and he alone, will enter the Holy of Holies each Yom Kippur. How could this not go to his head?

The consecration of Aaron and his sons lasted seven days. Many sacrifices were offered on the altar. I want to note two curious and telling things: The first is that as soon as Moses finishes winding turbans around the heads of Aaron’s sons—the last act in dressing them in their priestly accountrements—Moses brings forward the very first sacrifice Aaron will ever make: it is a chatat, a sin offering.

Why is the first sacrifice, the one that is intended to purify the altar, specifically a sin offering?And further, as we will see in next week’s parashah, Shemini, the very first sacrificial offering made on the eighth day, after the week of consecration is complete and the regular course of sacrifices commences, is also a chatat (sin offering). Could it be that the message of the sin offering, first during the week of consecration and first after the consecration is complete, is a reminder to Aaron that he is not only as imperfect as all people are, and vulnerable to doing the wrong thing, but perhaps even especially so because of his exalted and honored status: if he lets it go to this head, he will succumb to the temptations of ego-aggrandizement.

In fact, there is a suggestion in the Babylonian Talmud that because Aaron not only loved peace, but actively pursued it in the community, he was sometimes more beloved of the people than his exalted and deeply humble brother Moses.

וכן משה היה אומר יקוב הדין את ההר אבל אהרן אוהב שלום ורודף שלום ומשים שלום בין אדם לחבירו שנאמר (מלאכי ב) תורת אמת היתה בפיהו ועולה לא נמצא בשפתיו בשלום ובמישור הלך אתי ורבים השיב מעון.
Moses's motto was: Let the law cut through the mountain. Aaron, however, loved peace and pursued peace and made peace between man and man, as it is written, The law of truth was in his mouth, unrighteousness was not found in his lips, he walked with Me in peace and uprightness and did turn many away from iniquity (Malachi 2:6). (BT Sanhedrin 6b)

R. Meir asked, What does, He prevented many from doing wrong (Malachi 2:6) mean? We could illustrate it as follows: Whenever Aaron encountered even someone of questionable reputation, he would stop and greet him. On the morrow, that same person might want to do something wrong, but would stop and think to himself: “Woe unto me! How would I lift my eyes afterward and look Aaron in the face? I would be ashamed before him when he greeted me.” Consequently, that man would restrain himself from doing wrong.

This is an extraordinary use of authority and status. We don’t find that Aaron issuing warnings, making threaten, berating, criticizing, or leveling condemnations. He greets everyone in the street, even knowing that they are of questionable reputation. He lives the teachings of Shammai, “Greet everyone with a cheerful face” (Pirke Avot 1:15) and of R. Matya b. Charash, “Be the first to extend greetings to every human being” (Pirke Avot 4:20). To be acknowledged by the High Priest, and in a warm and friendly way, inspires those who are inclined to do wrong think twice, think better of themselves, and consequently behave better. What a wise and powerful use of authority.

The second example is a model we might, ourselves, have the opportunity to follow. (I once did, and it worked splendidly.) Here Aaron does far more than greet people in the street. He stops when he recognizes their pain. He sits and listens to their story. He understands that their quarrel is not black-and-white and that each carries a share of the responsibility for the breach in the relationship. But Aaron does not pull rank, judge, and assign blame. Rather, he gives voice to the best in the other party.[1] In the safe space Aaron creates, each person can pull back from anger that obscures their ability to see the situation from the perspective of the other, assume proper responsibility for the feud, and extend forgiveness to the other.

The two examples of Aaron’s peace-making skills demonstrate how Aaron uses his authority and status. It’s not about him. It’s about what he can do for others.

As a school safety, I was initially assigned to the K-3 wing of the school; my job was to insure that the students exited school at 3:20 pm in an orderly manner. It wasn’t easy and I did a lousy job. Many of the third graders and a few of the second graders towered over me. No one listened to me. I didn’t last two days. I was serendipitously reassigned to the “big corner” a block from school where almost everyone crossed to walk home. It was easy because everyone knew the drill. No yelling required. Best of all, this was a high-prestige post which I had snagged not because I was good at the job, but because I was too short to command authority anywhere else. Several weeks into the job, for some inexplicable reason, a kindergartner walked out into the road just as a car approached the corner, even though the crowd of children stood patiently on the sidewalk. As I had been trained, I grabbed the child and hauled her back onto the curb. In the scheme of things, it was a minor incident. There were some gasps and a few sighs of relief, but in 15 seconds it was all over and life continued. For me, however, something had changed. I finally got it. The belt was not a mark of greatness. It was the uniform of someone beholden to others. It wasn’t about me. It also was’t about being a safety; it was about the safety of the other kids. I was there to serve them. It’s a lesson most of us have to keep relearning throughout life.

Would that so many in positions of authority felt that they were there to serve not their egos, but the needs of others.

© Rabbi Amy Scheinerman
[1] Perhaps it’s needless to say, but the original text couches everything on the masculine: both parties to the feud are men. It was my choice to make one a man and one a woman, rather than say s/he and his/hers throughout, in order to make the text comport with modern sensibilities.
Posted by Rabbi Amy Scheinerman at 6:06 PM