I have met many people whose desires and expectations to have transforming religious experiences have not been met. Some wonder if they’re doing something wrong, or could learn a technique to make the heavens part, or if something is inherently wrong with them. When I probe a bit to find out what the model for their expectation is, it is often a story they’ve heard about someone else’s experience. Stories, as we know, have long tails that brush against everything they pass…or sometimes are simply tall tales.

This week’s parashah closes out the Book of Exodus. In the first day of the first month of Israel’s second year in the Wilderness, Moses sets up the Tabernacle, pitching its tent and coverings, and placing the altar, table, lamp stand and all the rest in their proper places.

When Moses had finished the work, the cloud covered the Tent of Meeting, and the Presence (kavod) of Adonai filled the Tabernacle. Moses could not enter the Tent of Meeting because the cloud had settled upon it and the Presence (kavod) of Adonai filled the Tabernacle. When the cloud lifted from the Tabernacle, the Israelites would set out on their various journeys; but if the cloud did not lift, they would not set out until such time as it did lift. For over the Tabernacle a cloud of the Lord rested by day and fire would appear in it by night, in the view of everyone in the house of Israel throughout their journeys. (Exodus 40:34–38)

“The cloud covered the Tent of Meeting, and the Presence of Adonai filled the Tabernacle.” The function of the Tabernacle was to create a portable Sinai, a means by which a continued avenue of communication with God could be maintained. As the people move away from the mount of revelation, they need a visible, tangible symbol of God’s ever-abiding Presence in their midst. It is not surprising, then, that the same phenomenon as occurred at Sinai, related in 24:15-17, now repeats itself. It will recur at the dedication of Solomon’s Temple, as is narrated in I Kings 8:10-11. The cloud is the manifest token of the immediacy of the Divine Presence. (JPS Torah Commentary, Exodus, p. 237)

This is a fascinating observation. The epic moment of encounter between God and Israel, the occasion in which they made a covenant that forged Israel’s future, is not just a moment in the past, but a prevailing present that travels with them through space and time. For a people newly redeemed from slavery in Egypt, where God had not been present in their lives for four centuries, this is an entirely new state of affairs. Now God is always present, hovering over them, day and night. 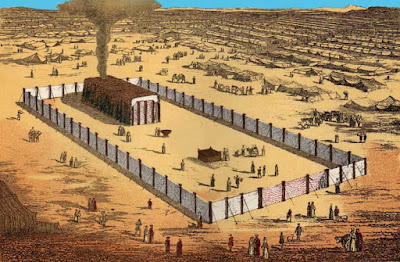 Sarna compares Torah’s account in Parshat Pikudei with the description in First Kings of the completion of Solomon’s Temple. Let’s take a look at it. When the finishing touches had been put on the Temple, The Priests brought the Ark of Adonai’s Covenant to its place underneath the wings of the cherubim, in the shrine of the House in the Holy of Holies (I Kings 8:6), but as soon as the Ark had been installed in the Mikdash (Temple in Jerusalem), the priests had to evacuate, for the cloud had filled the House of Adonai and the priests were not able to remain and perform the service because of the cloud, for the Presence (kavod) of Adonai filled the House of Adonai (I Kings 8:10–11). It was clear to everyone present, as it is to us as readers, that the Mikdash is the legitimate successor of the Mishkan (Wilderness Tabernacle); God moves in and takes up residence.[1]

Yet, Sarna’s observation that the cloud in the Mishkan signals that the Tabernacle is a portable Sinai inspires a question. For both the Mishkan in the Wilderness and later the Mikdash in Jerusalem, the cloud of God’s Presence fills space in such a way that people cannot co-abide. This was not the case at Mount Sinai. While the account of Revelation at Sinai (Exodus 24:15–17) describes the cloud as covering the mountain and hiding it from sight for six days, on the seventh day Moses is summoned into the cloud, at which point God’s Presence appears not as a cloud, but as consuming fire, to all the Israelites encircling the base of the mountain. At Sinai, Moses spent 40 days and nights at the peak of the mountain inside the cloud.
The cloud that fills the Mishkan, in contrast, prevents Moses from entering, and the cloud that fills the Mikdash sends the priests scurrying out. If the cloud hovering over the Mishkan is God’s Presence, why does it keep Moses out when, at the moment of revelation, Moses was invited inside?

Rambam[2] thought that the cloud barred Moses from entering because God wanted him to receive divine permission to enter, just as he had done at Sinai. Nachmanides[3] concurs. Rashbam[4] said the cloud settled on the Tent of Meeting  to demonstrate God’s love for Israel, and it rested there only temporarily; it subsequently withdrew and settled over the Ark. Sarna tells us: “It is unclear whether entry is literally hindered, or is impermissible, or that he simply dared not enter” (JPS Torah Commentary, Exodus, p. 237).

Whichever explanation you prefer, what is clear is that the full, direct, unmitigated encounter at Sinai is not fully replicated in the Mishkan. God is with them as they travel, but not in the way God was with them at Sinai. Now the people must settle into a day-to-day, year-to-year relationship with God without fireworks and the sound-and-light show they beheld at the mountain. The prophets and Sages of the Talmud likened the Revelation at Mount Sinai to the wedding of Israel and God.[5] In much the same way, the experience of a wedding — romantic and exciting — can in and of itself kindle love and passion. But a wedding lasts only a few hours, and then the couple must settle down to everyday life. The peak experience of the wedding may remain a vivid memory, nourished by photo albums and videos that stir up love and passion, but it happens once. After the wedding, the couple must consciously love one another to fan the flames. The Mishkan is not the mountain; it’s the video recording. The Presence of God filled the Tabernacle—keeping others, even Moses, outside, because the people cannot fully return to their Sinai wedding; now they must generate love to experience God. That is much harder to do. A wedding is an event that requires a great deal of preparation, but the event itself, as it is happening, envelopes the couple in its magic. The marriage requires their hard work and effort.

The hasidic rebbe, Yaakov Aryeh of Radzymin (1792–1874), a disciple of Simcha Bunem, explained:

And the Presence of Adonai filled the Tabernacle. The entire Sanctuary was filled with Israel’s love and the longing for God, because the Sanctuary and its utensils had come from the people’s donations and their strong desire to express their love of God. As a result, the Shekhinah (the Divine Presence) rested upon them, filling every possible place. That is what is meant by the Presence of Adonai filled the Sanctuary.

Once the Mishkan is erected, the Israelites do not passively experience God’s Presence as they did at Mount Sinai. Now they must actively seek God’s Presence through their love and longing for God, and devotion to serving God. God is always present, but encounter must now be initiated through their own love and actions.

The hasidic master, Menachem Mendel of Kotzk once posed this question to visitors: “Where is the dwelling place of God?” Laughing, they responded, “What a thing to ask! Is not the whole earth full of God’s glory?” The Kotzker Rebbe then answered his own question: “God dwells wherever we let God in.”[6] I don’t know if there is a secret to having a transformative “religious experience” but if there is, it happens through our initiation by acts of love and devotion: love of God, love of other people, love for the universe. When we reach out in love, God reaches back.

[1] The author of the account of the installation of the Ark in Solomon’s Temple clearly sought to express this by replicating salient details from the story of the inauguration of the Wilderness Mishkan, chief among them the description of the cloud that filled the space in such a way that there was no room for people.
[2] Moses Maimonides (the Rambam) was a physician, rabbi, and philosopher, born in Cordova, Spain in 1135. He died in Egypt in 1204. He wrote the Mishnah Torah, a code of Jewish law, and Guide for the Perplexed, a philosophical treatise. Rambam also wrote extensive commentaries on the Torah.
[3] Rabbi Moses ben Nachman (Nachmanides) was born in Girondi, Spain in 1194 and died in Acco in 1270. He was a rabbi, philosopher, physician, and biblical commentator.
[4] Rabbi Shmuel ben Meir (Rashbam), a leading French Tosafist, was the grandson of Rashi. He lived from c.1085 until c.1158.
[5] The prophets were the first to use this metaphor. See Hosea 2:21-22 and Jeremiah 31:31. The Rabbis imagined and enlarged upon the image. See BT Pesachim 106a, for example.
[6] There are numerous versions of this story, each teaching the same insight. This version follows Martin Buber, Tales of the Hasidim: Later Masters (New York: Schocken Books, 1948), p. 277.
Posted by Rabbi Amy Scheinerman at 12:46 PM